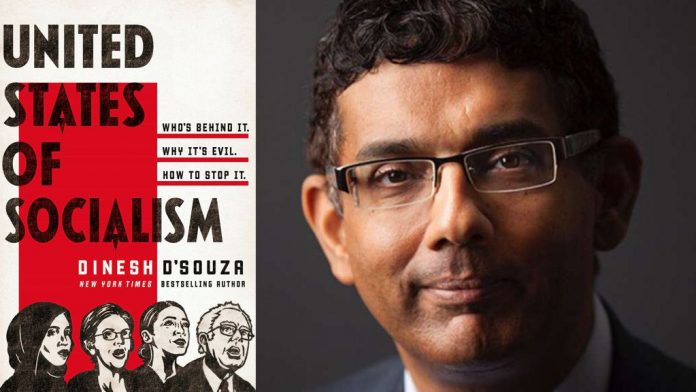 For those who witnessed the global collapse of socialism, its resurrection in the twenty-first century comes as a surprise, even a shock. How can socialism work now when it has never worked before?

In this pathbreaking book, bestselling author Dinesh D’Souza argues that the socialism advanced today by the likes of Alexandria Ocasio-Cortez, Bernie Sanders, Ilhan Omar and Elizabeth Warren is very different from the socialism of Lenin, Mao and Castro. It is “identity socialism,” a marriage between classic socialism and identity politics. America’s typical socialist is not a working-class union man but a Black Lives Matter activist, a transgender militant or a prophet of environmental apocalypse. Today’s socialists claim to model themselves not on Mao’s Great Leap Forward or even Venezuelan socialism but rather on the “socialism that works” in Scandinavian countries like Norway and Sweden.

This is the new face of socialism that D’Souza confronts and decisively refutes with his trademark incisiveness, wit and originality. He shows how socialism abandoned the working class and found new recruits by drawing on the resentments of race, gender and sexual orientation. He reveals how it uses the Venezuelan, not the Scandinavian, formula. D’Souza chillingly documents the full range of lawless, gangster, and authoritarian tendencies that they have adopted.

United States of Socialism is an informative, provocative and thrilling exposé not merely of the ideas but also the tactics of the socialist Left. In making the moral case for entrepreneurs and the free market, the author portrays President Trump as the exemplar of capitalism and also the most effective political leader of the battle against socialism. He shows how we can help Trump defeat the socialist menace.

DINESH D’SOUZA has had a prominent career as a writer, scholar, public intellectual, and filmmaker. Born in India, D’SOUZA came to the U.S. as an exchange student at the age of 17 and graduated Phi Beta Kappa from Dartmouth College. The author of many bestselling books―Illiberal Education, Obama’s America, Death of a Nation and The Big Lie―he is also the creator of three of the top ten highest-grossing political documentaries ever made.

Dinesh D’Souza has had a 25-year career as a writer, scholar, and public intellectual. A former policy analyst in the Reagan White House, D’Souza also served as John M. Olin Fellow at the American Enterprise Institute, and the Robert and Karen Rishwain Fellow at the Hoover Institution at Stanford University. He served as the president of The King’s College in New York City from 2010 to 2012.

Called one of the “top young public-policy makers in the country” by Investor’s Business Daily, D’Souza quickly became known as a major influencer on public policy through his writings. His first book, Illiberal Education (1991), publicized the phenomenon of political correctness in America’s colleges and universities and became a New York Times bestseller for 15 weeks. It has been listed as one of the most influential books of the 1990s.

In 1995, D’Souza published The End of Racism, which became one of the most controversial books of the time and another national bestseller. His 1997 book, Ronald Reagan: How an Ordinary Man Became an Extraordinary Leader, was the first book to make the case for Reagan’s intellectual and political importance. D’Souza’s The Virtue of Prosperity (2000) explored the social and moral implications of wealth.

In 2002, D’Souza published his New York Times bestseller What’s So Great About America, which was critically acclaimed for its thoughtful patriotism. His 2003 book, Letters to a Young Conservative, has become a handbook for a new generation of young conservatives inspired by D’Souza’s style and ideas. The Enemy at Home, published in 2006, stirred up a furious debate both on the left and the right. It became a national bestseller and was published in paperback in 2008, with a new afterword by the author responding to his critics.

Just as in his early years D’Souza was one of the nation’s most articulate spokesmen for a reasoned and thoughtful conservatism, in recent years he has been an equally brilliant and forceful defender of Christianity. What’s So Great About Christianity not only intelligently explained the core doctrines of the Christian faith, it also explained how the freedom and prosperity associated with Western Civilization rest upon the foundation of biblical Christianity. Life After Death: The Evidence shows why the atheist critique of immortality is irrational and draws the striking conclusion that it is reasonable to believe in life after death.

In 2010, D’Souza wrote The Roots of Obama’s Rage (Regnery), which was described as the most influential political book of the year and proved to be yet another best seller.

In 2012, D’Souza published two books, Godforsaken and Obama’s America: Unmaking the American Dream, the latter climbing to #1 on the New York Times bestseller list and inspiring a documentary on the same topic. The film, called “2016: Obama’s America,” has risen to the second-highest all-time political documentary, passing Michael Moore’s Sicko and Al Gore’s An Inconvenient Truth. In addition, 2016 has risen to #4 on the bestselling list of all documentaries.

These endeavors—not to mention a razor-sharp wit and entertaining style—have allowed D’Souza to participate in highly-publicized debates about Christianity with some of the most famous atheists and skeptics of our time.

Born in Mumbai, India, D’Souza came to the U.S. as an exchange student and graduated Phi Beta Kappa from Dartmouth College in 1983.

D’Souza has been named one of America’s most influential conservative thinkers by the New York Times Magazine. The World Affairs Council lists him as one of the nation’s 500 leading authorities on international issues, and Newsweek cited him as one of the country’s most prominent Asian-Americans.