‘To avoid war, you must convince your adversary that you are both capable and willing to wage war,’ said Rep. Mike Gallagher (R-Wis.)

The U.S. military is at growing risk of not being able to meet the demands of defending America’s vital national interests, according to an annual report released by The Heritage Foundation, a Washington-based conservative think tank.

“This is the logical consequence of years of sustained use, underfunding, poorly defined priorities, wildly shifting security policies, exceedingly poor discipline in program execution, and a profound lack of seriousness across the national security establishment even as threats to U.S. interests have surged,” the report says.

Since 2015, The Heritage Foundation has published the Index of U.S. Military Strength, based on a consistent set of criteria, to gauge the military’s ability to perform. The most recent report is for 2023.

“It is about the number of ships and planes we have. It’s also about personnel, and we’re having a very hard time … in recruitment, because of the woke agenda, that one particular political movement in this country prioritizes over American military readiness,” Kevin Robert, president of the foundation, said in a presentation about the report.

“There is no way, as our scholars report, that the United States can engage in a two-front war. And in fact, we’re increasingly dubious that we could even engage in a single front war because of this lack of readiness,” he said. “Considering the existential threat in the world, which is the Chinese Communist Party, obviously, rejuvenated after Xi Jinping’s reelection on Sunday, the United States needs to get busy in fixing this problem.” 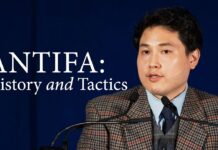