WASHINGTON—Russian oil imports have set a new record in the United States despite the strained relationship between Washington and Moscow. Industry experts believe the Biden administration’s climate policies will make the country more dependent on foreign oil producers.

The United States imported record levels of crude oil from Russia in March and is expected to continue importing at high levels in coming months, according to the Western Energy Alliance, a trade association that represents 200 independent natural gas and oil producers in the United States.

Imports of crude oil and petroleum products from Russia reached 22.9 million barrels in March, the highest level since August of 2010, according to International Energy Agency (IEA). Of the total amount, crude oil imports from Russia stood at 6.1 million barrels. Russia has become the third-largest oil exporter to the United States.

High levels of oil shipment from Russia have continued since March, according to ClipperData, a commodity intelligence company that monitors cargo shipments worldwide.

“Last month we saw a record 5.75 million barrels of Russian crude discharged in the US, and we’re projecting a further record this month of 7.5mn bbls,” ClipperData analysts wrote on Twitter on June 7.

Critics argue that Biden’s climate agenda is hard on the U.S. oil industry but soft on foreign producers.

“It’s disturbing to our industry that the Biden administration goes out of its way to disadvantage the American producer while buttressing the Iranian and Russian industries,” Kathleen Sgamma, president of the Western Energy Alliance, told The Epoch Times.

The recent spike in Russian oil imports has followed the “misguided climate policies” of the administration, including ending the Keystone XL pipeline and pausing new oil and natural gas permitting on public lands and waters, according to Sgamma.

President Joe Biden has “tipped us into oil dependence on Russia just a year after complete independence,” Sgamma said, calling it “a geopolitical gift” to the Kremlin. 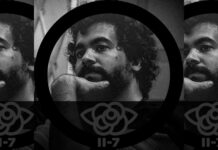 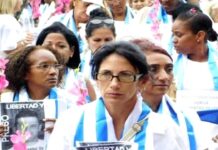 FCC Commissioner: US Government Can Use High-Altitude Balloons to Provide Internet to Cubans 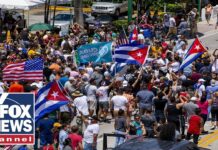 ‘The Communists have lost control’: First Cuban demonstrator is killed after police ‘open fire on peaceful protest’ while anti-government reporter is arrested live on...