U.S. Secretary of State Antony Blinken said on Thursday that the United States would not leave Australia alone in the face of Beijing’s economic coercion, and warned that such tactics against an ally would hinder U.S. ties with China.

“I reiterated that the United States will not leave Australia alone on the field, or maybe I should say alone on the pitch, in the face of economic coercion by China,” Blinken told reporters. “That’s what allies do. We have each other’s backs so we can face threats and challenges from a position of collective strength.”

The United States has repeatedly criticized Beijing’s efforts to coerce Australia with trade sanctions on products ranging from beef to wine, with Blinken saying that “such actions targeting our closest partners and allies will hinder improvements in our own relationship with China.”

Blinked described the U.S.-Australia alliance as an “unshakable commitment” that has been “an anchor for peace, security, and stability in the Indo-Pacific for decades.”

Australia-China ties have steadily soured for the past five years as Canberra began to implement measures to protect its national interests in the face of Beijing’s increasing interference in Australia’s domestic political environment—including a scandal involving payments made to a former federal senator, and an alleged plot to place a spy in Parliament House.

But tensions took a sharp turn last year after Australia called for an inquiry into the origins of the CCP (Chinese Communist Party) virus, commonly known as novel coronavirus.

The Chinese counterparts of Australian politicians have not been picking up the phone for minister-level discussions since last year, and just last week Beijing suspended all activity under a bilateral economic dialogue with Australia. 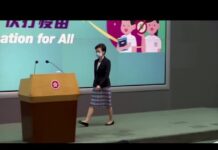