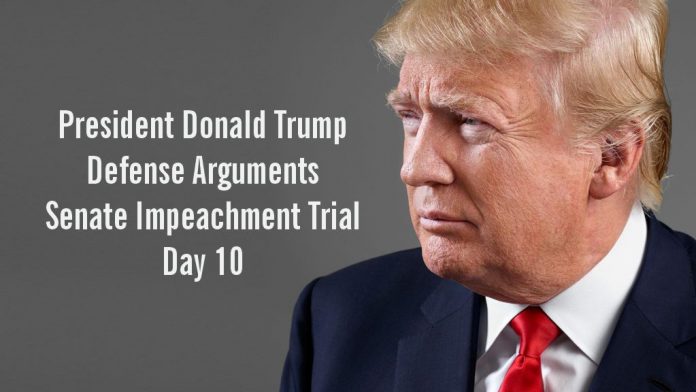 During the Senate impeachment Trial Day 10, January 31, 2020 the Senate continues the impeachment trial of President Trump. U.S. lawmakers and impeachment managers continue their debate and expect to have a crucial vote in the battle for witnesses.

After days of arguments posed by the House managers and Trump’s legal team, followed by questions posed by senators, the lawmakers debate and vote on whether they wish to subpoena new witnesses and documents on Friday, Jan. 31, 2020. Then the Senate must decide whether to acquit the president or convict him of the charges and remove him from office. The House of Representatives impeached Trump in December on two articles — abuse of power and obstruction of Congress.

Below is the video playlist of day 10 of the continuation of the Senate impeachment trial of President Donald Trump on January 31, 2020.

Patrick Philbin, a member of President Donald Trump’s legal team, said the House managers’ argument that a trial must include witnesses and documents “is not that simple.” Philbin said their argument is a “trope” that’s being used “to disguise the real issues, the real decisions that you’d be making this decision about witnesses because there’s a lot more at stake there.” Part of the problem, Philbin said, is that the two articles of impeachment are “defective.” He also said that there have been multiple witnesses presented in the trial, in the form of transcripts and dozens of video clips. “You’ve gotten a lot of evidence already,” he said.

Patrick Philbin, a member of President Donald Trump’s legal team, said that the two articles of impeachment brought forth by the House of Representatives — abuse of power and obstruction of Congress — are “defective.” He said the obstruction charge suggested there was an impeachable offense to defend the separation of powers, and that no witnesses would say anything that made a difference in this charge. Then, he said that the abuse of power charge was also “defective on its face,” and would do “grave damage” to the separation of powers clause under the Constitution.