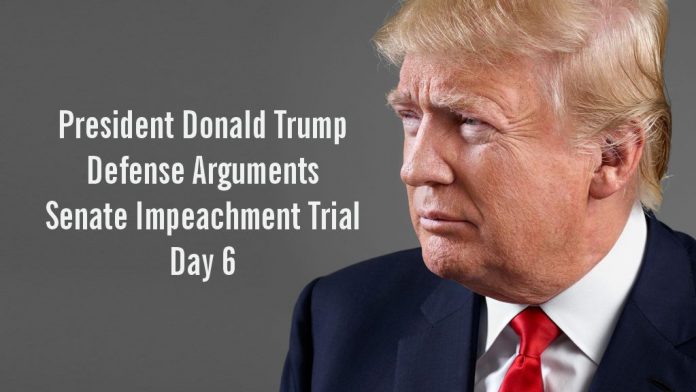 Jay Sekulow, a lawyer for President Donald Trump, told the U.S. Senate on Jan. 27, 2020 that the impeachment of the president is about “deep policy differences.” He added those differences “should not be the basis of an impeachment” and if they are, it puts the U.S. constitutional framework in danger.

White House counsel Ken Starr argued on Jan. 27, 2020 that the Senate would do well to return to a time “when presidential impeachment was truly a measure of last resort.” Starr, a member of Trump’s legal team who also headed the Whitewater investigation into then-President Bill Clinton, reminded lawmakers that of the 63 impeachment inquiries authorized by the House of Representatives throughout history, only eight have resulted in conviction and removal from office — and “each and every one has been a federal judge,” rather than a president. While three U.S. presidents — Andrew Johnson, Bill Clinton, and now Donald Trump — have been impeached by the House, no president has ever been convicted and removed from office by the Senate. Starr urged Senators to “return to the text of the Constitution itself” in making their decision. He asked senators to consider the fact that presidents do not serve a lifetime tenure, like judges do, suggesting that they should face a higher bar for impeachment, and reminded lawmakers that this was the fourth presidential impeachment in history, but the third over the past half-century. “Like war, impeachment is hell,” said Starr. “Or at least, presidential impeachment is hell.” (Read Transcript)

Michael Purpura, deputy White House counsel, argued on Jan. 27, 2020 that there was no link between U.S. military aid to Ukraine in exchange for investigations into Trump’s political rivals, including the Bidens. Purpura argued that Trump’s concerns about corruption in Ukraine, which the White House has said was a key reason for withholding the aid, were documented as far back as mid-2017. (Read Transcript)

Patrick Philbin, a member of President Donald Trump’s legal team, said the president was not given due process during the House impeachment inquiry, saying he was “locked out” of nearly all parts of the investigation. But Philbin said the Senate should not “redo” what the House failed to do, by calling new witnesses because it would set a bad precedent for future impeachments. Philbin further argued that Trump did not obstruct Congress by defending himself using the court system. (Read Transcript)

Jane Raskin, the private counsel to President Donald Trump, argued before the U.S. Senate on Jan. 27 that Trump’s personal attorney, Rudy Giuliani, “was not on a political errand” when he began looking into Ukraine. Raskin said Giuliani’s motive “had nothing to do with the 2020 election.” Raskin argued that Giuliani was trying to defend Trump during special counsel Robert Mueller’s investigation by looking into claims that Ukraine worked against Trump in the 2016 election. (Read Transcript)

Pam Bondi, the former attorney general of Florida who is a member of the Trump impeachment legal team, outlined on Jan. 27, 2020 the concerns she said the president had about potential corruption on the part of the Bidens in Ukraine. Bondi pointed to numerous news reports raising questions about Hunter Biden’s appointment to the board of Ukrainian energy company Burisma. The move “looks nepotistic at best, nefarious at worst,” Bondi said, speaking on the Senate floor during the impeachment trial. (Read Transcript)

Patrick Philbin, a member of President Donald Trump’s legal team, said the president was not given due process during the House impeachment inquiry, saying he was “locked out” of nearly all parts of the investigation. But Philbin said the Senate should not “redo” what the House failed to do, by calling new witnesses because it would set a bad precedent for future impeachments. Philbin further argued that Trump did not obstruct Congress by defending himself using the court system. (Read Transcript)

Eric Herschmann, a member of Trump’s legal team, argued before the Senate on Jan. 27, 2020 that Hunter Biden made millions of dollars serving on the board of Ukrainian gas company Burisma while his father was serving as vice president, profiting off of his last name. Herschmann cast doubt on Hunter’s previous statements that he joined the board of Burisma to enforce corporate governance and transparency in Ukraine and criticized Democrats for dismissing the issue: “Can you imagine what House manager Schiff would say if it was one of the President Trump’s children who was on an oligarch’s payroll?” he asked.

Robert Ray, a member of Trump’s legal team and the former independent counsel during the Clinton administration, wondered what America has learned 20 years later after the last modern impeachment. “I fear that the answer to that question is nothing at all,” he said. If the impeachment articles move forward, “impeachment in the future literally will mean not only that proof of high crimes is no longer necessary to sustain the effort, but that no crime at all was sufficient so long as a partisan majority in the House said so.” Ray then criticized the “endless procession of legal theories” that have been argued in “this partisan impeachment.”

Video 10: Alan Dershowitz says charges against Trump are ‘outside’ of impeachment offenses

Alan Dershowitz, a member of Trump’s legal team and former Harvard Law School professor, argued that the charges leveled against President Donald Trump by the House didn’t reach the level of impeachment and removal. “Purely non-criminal conduct, including abuse of power and obstruction of Congress, are outside the range of impeachment offenses,” he said. Dershowitz said this was the “key point” he’s making in the proceedings. However, other legal scholars have said that the U.S. Constitution’s “high crimes and misdemeanors” standard for impeachment is open enough to include charges like abuse of power. (Read Transcript)

Pat Cipollone, White House counsel, argued for a “golden rule of impeachment,” that for Democrats would mean, “Do onto Republicans as you would have them do onto Democrats.” He added that he hoped there wouldn’t be another impeachment in the future.