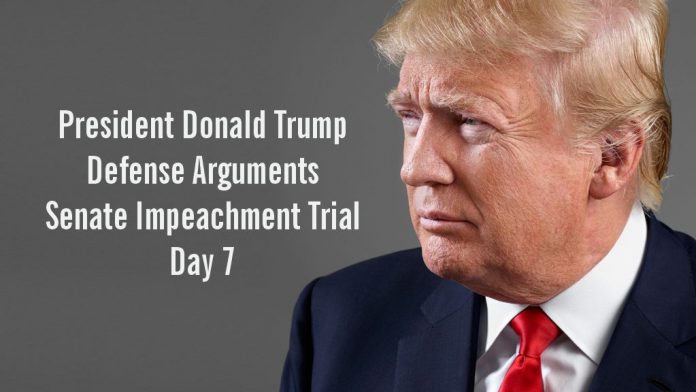 On the final day of opening defense arguments in the impeachment trial, President Donald Trump’s legal team argued that the Democrats’ definition of “abuse of power” is too vague to be considered an impeachable offense. Deputy White House counsel Patrick Philbin said on Jan. 28, 2020 that the Democrats are not using a standard that the Constitution’s framers would have recognized. He argued they are instead relying on a definition that is “infinitely malleable.”

On the final day of opening defense arguments in the impeachment trial, Deputy White House counsel Patrick Philbin said there is an “inherent flaw” in the articles of impeachment against Trump if senators do not think a president must commit a crime to be impeached. The abuse of power charge “is so malleable based on purely subjective standards that it does not provide any cognizable notice of an offense,” Philbin said on Jan. 28, 2020. Philbin also argued that other parts of Democrats’ arguments, including accusations that Trump tried to cover up the contents of his July call with Ukraine’s president, rely too much on speculation about the president’s motives.

Impeachment “is not a game of leaks and unsourced manuscripts,” President Donald Trump’s lawyer Jay Sekulow said during the final day of the defense’s opening arguments in the Senate impeachment trial. Sekulow’s comments referred to a New York Times report this week that former national security adviser John Bolton’s upcoming book indicates Trump told him he wanted to withhold U.S. aid to Ukraine until that nation agreed to announce an investigation into Trump’s political rival. The New York Times report was based on multiple anonymous sources who described the contents of Bolton’s unpublished manuscript that was sent to the White House as part of a standard review process. Sekulow argued on Jan. 28 that the impeachment trial should be “above that fray” of leaks and politics and warned that if senators allowed that kind of information to change the trial, it would change the constitutional framework for “generations.”

White House counsel Pat Cipollone on Jan. 28 urged the Senate to “put the Constitution above partisanship” in voting on whether to convict President Donald Trump and remove him from office. Cipollone reminded senators that the presidential election is coming up in November, and argued that interfering with that process “would cause serious and lasting damage.” Cippolone asked, “Why not American people with this decision?”