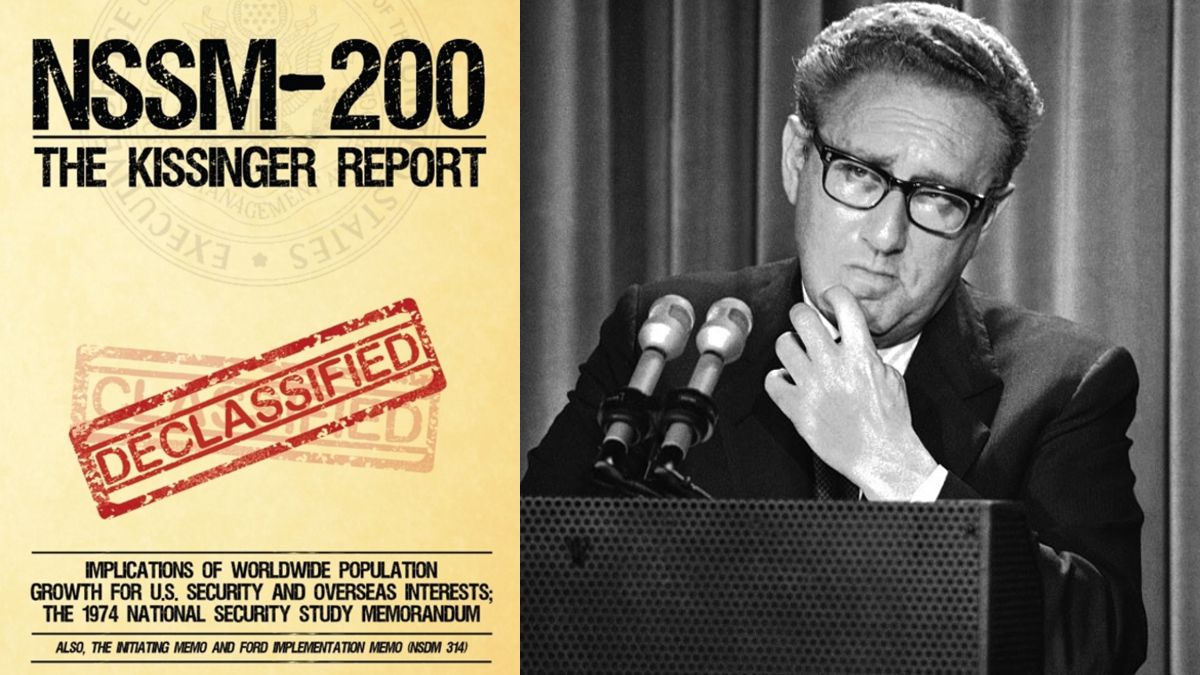 The study falsely claimed that population growth in the so-called Lesser Developed Countries (LDCs) was a grave threat to U.S. national security. Adopted as official policy in November 1975 by President Gerald Ford, NSSM 200 outlined a covert plan to reduce population growth in those countries through birth control, and also, implicitly, war and famine. Brent Scowcroft, who had by then replaced Kissinger as national security adviser (the same post Scowcroft was to hold in the Bush administration), was put in charge of implementing the plan. CIA Director George Bush was ordered to assist Scowcroft, as were the secretaries of state, treasury, defense, and agriculture.

The bogus arguments that Kissinger advanced were not original. One of his major sources was the Royal Commission on Population, which King George VI had created in 1944 “to consider what measures should be taken in the national interest to influence the future trend of population.” The commission found that Britain was gravely threatened by population growth in its colonies, since “a populous country has decided advantages over a sparsely-populated one for industrial production.” The combined effects of increasing population and industrialization in its colonies, it warned, “might be decisive in its effects on the prestige and influence of the West,” especially effecting “military strength and security.”

NSSM 200 similarly concluded that the United States was threatened by population growth in the former colonial sector. It paid special attention to 13 “key countries” in which the United States had a “special political and strategic interest”: India, Bangladesh, Pakistan, Indonesia, Thailand, the Philippines, Turkey, Nigeria, Egypt, Ethiopia, Mexico, Brazil, and Colombia. It claimed that population growth in those states was especially worrisome, since it would quickly increase their relative political, economic, and military strength.

For example, Nigeria: “Already the most populous country on the continent, with an estimated 55 million people in 1970, Nigeria’s population by the end of this century is projected to number 135 million. This suggests a growing political and strategic role for Nigeria, at least in Africa.” Or Brazil: “Brazil clearly dominated the continent demographically.” The study warned of a “growing power status for Brazil in Latin America and on the world scene over the next 25 years.”

Food as a weapon

There were several measures that Kissinger advocated to deal with this alleged threat, most prominently, birth control and related population-reduction programs. He also warned that “population growth rates are likely to increase appreciably before they begin to decline,” even if such measures were adopted.

A second measure was curtailing food supplies to targetted states, in part to force compliance with birth control policies: “There is also some established precedent for taking account of family planning performance in appraisal of assistance requirements by AID [U.S. Agency for International Development] and consultative groups. Since population growth is a major determinant of increases in food demand, allocation of scarce PL 480 resources should take account of what steps a country is taking in population control as well as food production. In these sensitive relations, however, it is important in style as well as substance to avoid the appearance of coercion.”

“Mandatory programs may be needed and we should be considering these possibilities now,” the document continued, adding, “Would food be considered an instrument of national power? … Is the U.S. prepared to accept food rationing to help people who can’t/won’t control their population growth?”

Kissinger also predicted a return of famines that could make exclusive reliance on birth control programs unnecessary. “Rapid population growth and lagging food production in developing countries, together with the sharp deterioration in the global food situation in 1972 and 1973, have raised serious concerns about the ability of the world to feed itself adequately over the next quarter of century and beyond,” he reported.

The cause of that coming food deficit was not natural, however, but was a result of western financial policy: “Capital investments for irrigation and infrastucture and the organization requirements for continuous improvements in agricultural yields may be beyond the financial and administrative capacity of many LDCs. For some of the areas under heaviest population pressure, there is little or no prospect for foreign exchange earnings to cover constantly increasingly imports of food.”

“It is questionable,” Kissinger gloated, “whether aid donor countries will be prepared to provide the sort of massive food aid called for by the import projections on a long-term continuing basis.” Consequently, “large-scale famine of a kind not experienced for several decades—a kind the world thought had been permanently banished,” was foreseeable—famine, which has indeed come to pass.

This article appeared as part of a feature in the December 8, 1995 issue of Executive Intelligence Review.