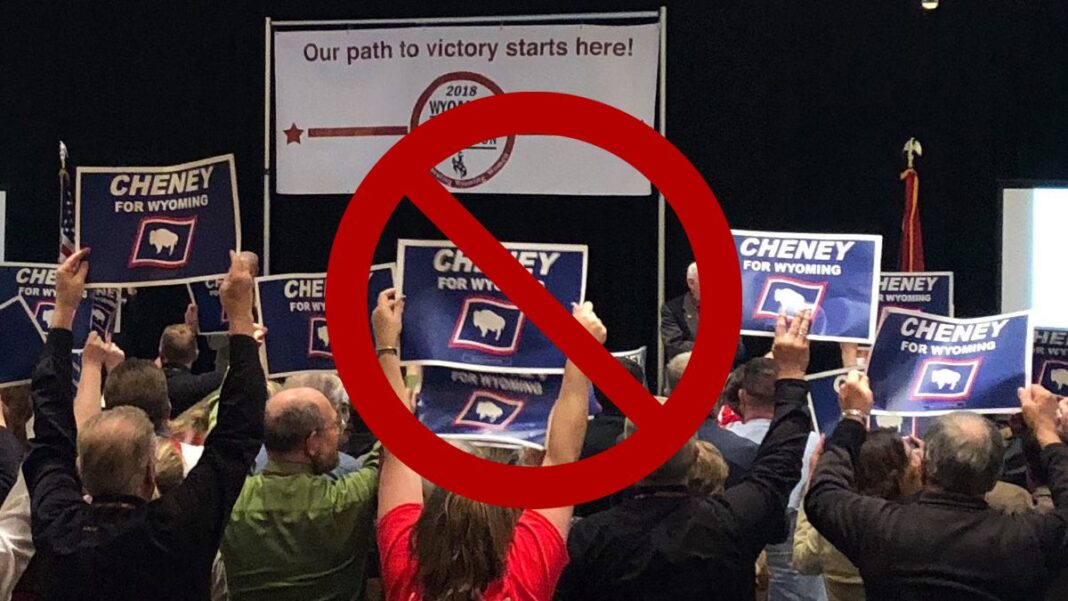 Amid all of the great victories for freedom and America in the past week, leftists also achieved a very sinister milestone in their anti-Second Amendment gun grabbing agenda. Leftist Democrats, with the help of fifteen “Republican” turncoats, were able to break any filibuster attempt in the US Senate, in order to pass their intentionally disguised bill, euphemistically named the “Bipartisan Safer Communities Act.” No mention in that sugar coated title of their obsession to gut the 2nd Amendment of course. And predictably, RINOs were right there to help make it happen and put a good face on it.

So how is such thinking able to infect the GOP, while Senate and House Democrats remain in total lockstep, avoiding any measures that would actually improve safety of kids in school, yet always tightening their death grip on foundational American rights? For the answer to that, one need only look to the chicanery going on in that reddest of red states, Wyoming. With the Wyoming primary less than two months way, the deck is being systematically stacked so that RINO traitor Liz Cheney may be able to cheat her way into another term, despite being thoroughly despised by real Republicans across the Cowboy State.

So far, while her challengers are making many public appearances and taking every possible opportunity to connect with the people on “Main Street,” Cheney has held only one event, a private venue for which attendees had to purchase tickets. Cheney does not dare show her disloyal face to Wyoming voters. Yet after such elitist actions, she is shameless enough to claim to “represent” them if she and the political establishment can succeed with their treachery.

For that to happen, she seeks to exploit the divided field of candidates, by luring Democrats to cross over and rally to her on primary election day. This scam has long been in place from a lineage of RINOs who gamed the political process to their advantage. Democrat voters are able to show up at the polling place on the day of the election, re-register as “Republicans,” cast a ballot for the most liberal candidate, and then re-register as Democrats before going home. When a sufficient number work this way in a coordinated effort the RINO can win, as has happened far too many times in the past.

Also, this week, Wyomingites were appalled to learn of another transparent effort by the political “Establishment” to tilt the field in Cheney’s direction. A Republican candidate “debate” is being held on Thursday. The public is prohibited from attending, along with any press except those selected by the debate “organizers.” And not surprisingly, that group is none other than the hard-left Wyoming “Public” Broadcasting System. The “debate” venue is their own head office. Nothing “public” about it, that moniker instead only connotes the fact that common citizens are forced to foot the bill for this leftist propaganda machine.

The debate moderator and panelists read like a “Who’s Who” of Wyoming liberals from Wyoming PBS corporation, along with one hand-picked newspaper “reporter.” The excuse for all of this clandestine behavior is “candidate safety,” as if Wyoming has ever had problems with their politicians being personally threatened with physical harm from the public or the press.

In truth, everyone involved knows just how thoroughly Cheney is despised, and that any actual public forum would spotlight her total betrayal of every tenet of Wyoming’s very conservative culture. Cheney has been a “darling” of the unending Pelosi/Schiff January 6 witch hunt, giving the shameless leftist Democrats their coveted banner of “bipartisanship.” Cheney’s willingness to embrace the Democrat agenda, while mocking and attacking real conservatism, proves beyond any doubt that she has zero intention of actually connecting with the people of Wyoming. Yet as with many carpet bagging predecessors, she used Wyoming as her political “springboard,” to gain standing inside the Beltway. Unless she’s able to retain her seat as Wyoming’s only member of the House, she will be off the public stage, and ever after a total pariah,

The RINO pipedream of returning to its former glory days of “business as usual,” by which its entrenched members could continue to play “opposition party” for the cameras while always giving the Democrats what they want was thoroughly exposed by President Trump. He used every means possible to actually advance a Conservative agenda, which redounded to the great benefit of America but to the dismay of the bipartisan “Ruling Class” inside the DC Swamp. A Cheney win, by any nefarious means, will be loudly and relentlessly spun by the entire leftist political/media axis as “proof” that America is turning its back on everything Trump. And you can be sure RINOs are every bit as invested in that outcome as are the Democrats.

As a “bellweather” of where the GOP is actually going, Wyoming and America need to recognize the stakes in this race, and then make the efforts to boot the likes of Cheney and reclaim their party from self-serving insiders. Anything less than a decisive victory for the Right will be construed as the people of Wyoming, that freest and reddest of States, concurring with the downward spiral of our Nation into the abyss of socialism, squalor and despotic oppression.