All of the problems that the Chinese Communist Party (CCP) is facing today come from fundamental structural factors that can’t be resolved. This is its biggest crisis.

Western countries also encounter issues, but under their democratic form of government, there are solutions. Whether it is fast or slow, deep or shallow, democracies can mitigate conflicts and ultimately redress the balance. However, the CCP’s problems require rectification to bring order out of chaos.

Rigidly adhering to communism is the CCP’s major structural problem. As proven by history, communism is wishful thinking. The disintegration of the Soviet Union and Eastern Europe in the communist bloc is an outstanding example of the failure of communism. Deng Xiaoping salvaging a failing system with a capitalist market economy through reform and openness is another. But the CCP continues to seek opportunities to rise while holding fast to communism.

Forty years of reform and openness have transformed the CCP from being strictly communist into crony capitalist, showing that communism is a big sham. However, it still ensures that Red elite families reap public wealth under the cover of a long-term brainwashing mechanism. Will the CCP completely relinquish communism? If they dare to do so, the tyranny will collapse.

Another fundamental problem of the CCP is leader Xi Jinping positioning himself as the “ultimate arbiter” in having the authority to give the final say. Among all the leaders of the CCP, I think only Mao Zedong had absolute authority. That’s until Xi began emulating Mao’s dictatorship.

However, Xi falls far behind Mao in many aspects. Regarding an evil nature and political astuteness, Mao enjoyed supreme power in personnel arrangements and left specific affairs such as government operations to Zhou Enlai, vice chairman of the CCP. However, Xi cannot even compare with Zhou’s high prestige as a Party veteran.

Xi’s absolute authority is tottering. It is not established by personal achievements of long-term political struggles, but by people around Xi providing unquestionable praise after he took office. Xi simply lacks personal charisma in the party. 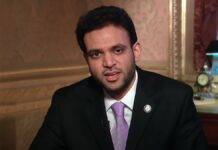