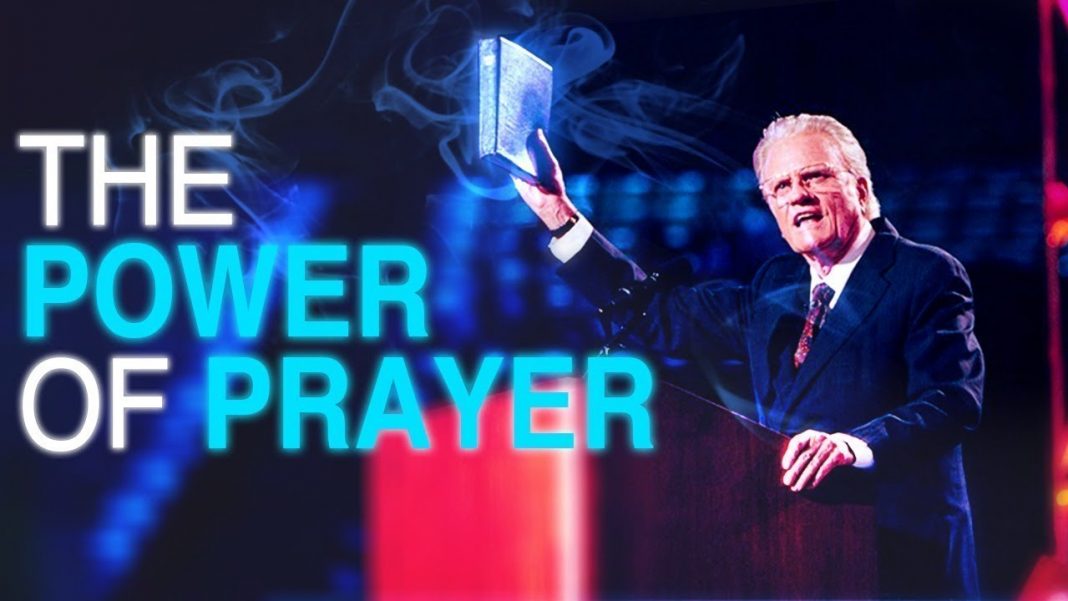 Billy Graham: If I had it to do over again I’d spend more time in meditation and prayer, just telling the Lord how much I love Him and adore Him.

In this Modern Age in which we’ve live we learn to harness the power of the atom, but very few of us have learned how to fully develop the power of prayer. We have not yet learned that a man is more powerful on his knees than behind the most powerful weapons we’ve ever developed. We’ve not learned that a nation is more powerful when it unites in earnest prayer to God. We have not discovered that the answer to our problems can be through contact with God. When the disciples came to Jesus and asked, “Lord teach us to pray.” The Savior answered their request by giving them His model petition, the Lord’s Pray. The Lord’s Prayer what was only the beginning of his sacred instruction. In scores of passages Christ offered further guidance and because he practice what He preach his whole life was a series of lessons on prevailing prayer. One of the most amazing things in all the scriptures is how much time Jesus took out for prayer. He only had three years of public ministry and yet Jesus was never in so big a rush but what he had time to spend hours in prayer. He prayed before every difficult task confronting Him. He prayed with regularity. Not a day began or closed on which he did not unfold his soul before his Father. How quickly and carelessly, by contrast, we pray. Snatches of memorized versus hastily spoken in the morning and then good bye God for the rest of the day until a few closing petitions at night. This is not the prayer program that Jesus outlines. Jesus pleaded long and repeatedly. It is recorded that he spent entire nights in fervent appeal. How little perseverance and persistence in pleading we show. The scripture says pray without ceasing. This should be the motto of every true follower of Jesus Christ, never stop praying no matter how dark and hopeless your case may seem. Our Lord frequently prayed alone, separating Himself from every earthly distraction. You Christians are listening to my voice, select a room or corner in your home or in your yard, where you alone can regularly and privately meet God. That quiet, secluded, soul to God praying in which you come to the mercy seat for divine blessing on your home and country can be the strongest secret weapon. Its most powerful spiritual defense can be prayer. A teenager wrote me the other day and asked, “Why don’t more churches kneel when they pray? I’ve often wondered that myself. While we can speak to our Father in any posture, lying on a sickbed, walking to work, sitting in an automobile, certainly the bended knee shows humility, subjection, and reverence. Mighty leaders and not hesitated to bow down before God. It was reported that one could always tell General Washington when he went to Congress in Philadelphia because he always knelt in prayer.

As we continue to watch the prayer life of Jesus, we noticed the earnestness with which he prayed. The New Testament records that he cried out with a loud voice, that in the intensity of his supplication He fell headlong on the damp ground in the garden and that he pleaded until His sweat was as it where great drops of blood. Too often we use petty little petitions, oratorical exercises, the words of others rather than the cries of our inner most being. Too often when we go to prayer out thoughts begin to roam. We insult God by speaking to Him with our lips, while our heart is far from Him. Suppose you were talking to the Queen of England as it has been my privilege to do on several occasions. You would not let your thoughts wander for one moment. You would be listen intensely interested to everything she said. How then dare we treat the King of Kings with disrespect and disdain.

There’s one more lesson that Jesus would teachers and that is the victorious assurance that God answers every true petition. Skeptics may question it, humanists may deny it, and intellectuals ridicule it. Yet, here is Christ’s own promise, ask in prayer believing ye shall receive. Trust that promise with all your soul, today. Build your hope for time and eternity on that divine fact. God answers prayer. Your Father possesses everything. He can supply all your wants according to His riches in glory by Christ Jesus. The bodied might of dictators, the glory of empires, are but passing gestures to Him. He can defeat the enemy of your soul and defend you from every danger. With God nothing shall be impossible. No task is to arteis, no problem too difficult, no burden too heavy for His love. The future with its fears and uncertainties is fully revealed to Him. He understands how much affliction and sorrows you need to help purify and preserve your soul for eternity. Turn to Him and you can say with Job, He knoweth the way I take, when He hath tried me, I shall come forth as gold. No ladies and gentlemen, we are not the masters of our own souls. Do not put your will above God’s will. Do not insist on your way. Do not dictate to God. Do not expect an immediate answer in the way, the place, and the manner that you’re demanding. Rather learn the difficult lesson of praying as the sinless Son of God Himself prayed, not my will but thine be done Hebrews 11:6. Hebrews 11:6, Without faith it is impossible to please Him. Now Christ has already done the work on the cross, but now comes your part. Without faith you cannot please Him. Will you say, what is faith?But faith is believing and receiving what God has revealed. What God has revealed in this book, what God has revealed in nature, what God has revealed in conscience.

Without faith it is impossible to please Him. Well you say what is faith? And it can be defined as that trust in the God of the scriptures and in Jesus Christ whom he sent. For salvation, faith is personal trust. Now the Bible teaches that faith is the only approach to God, for he that cometh to God must believe that He and the Bible tells us that faith is commanded. Jesus said, “Have faith in God and that’s an imperative there in Matthew or Mark 11. And then on another occasion John said, and this is His commandment this is the Commandment of Jesus, that we should believe on the name of his son Jesus Christ, It’s a command. God commands you. He commands you. He gives you and order. Believe, believe, believe, believe. There’s no other way that you can approach God. No other way you can know God. No other way you can come in contact with God except through faith. Therefore being justified by faith we have peace with God through our Lord Jesus Christ, Romans 5:1. Without faith it is impossible to please Him.

There are many of you today that pray in times of danger. There are thousands of people that pray, but they pray only when they’re in times of great stress, danger, and I’m certainly. I’ve been an airplanes when the motor conks out and people started praying. We’ve flown through bad thunderstorms when people who never thought to pray before we’re praying all around us. It seems to be instinctive in man to pray and times of trouble. Christ commanded his followers to pray, both by the example He set in praying, and in his teaching. So fervent and direct where his prayers, that once, when He was finished praying, his followers turn to him and said, “Lord teach us to pray”. On another occasion he taught them to pray by way of illustration through a parable. He taught of the widow and the unjust judge who rendered a favorable decision to the widow, not because he feared, but because of her perseverance. So Jesus said that men ought always to pray. From one end of the Bible to the other there are stories of those whose prayers have been answered. Men who turned the tide of history by prayer. Men who fervently prayed and God answered. Abraham prayed and as long as he prayed, God would not destroy the city of Sodom, where Abraham’s nephew Lot was living. There is only one power available to change the course of history, and that is the power of prayer, prayed by God fearing, Christ believing, men.

Our nation was founded by men who believed in prayer. Benjamin Franklin said at the Philadelphia Convention in 1787, when our government was in the process of being formed, “I’ve lived, sir, a long time, and the longer I live the more convincing proofs I see of this truth, that God governs in the affairs of men.” Our first President George Washington lead his armies to victory, but not until first he had taken time alone to invoke God’s blessings upon their call. Down through our history our nation’s leaders have carried their plans and hopes to God in prayer. Yet today we have come to a place where we regard prayer simply as a formality. We have no sense of coming to grips with God, but simply the continuation of a venerated tradition. But you have never come to know Jesus Christ and the scripture says the one mediator between God and man is Jesus Christ. You must know Him and you must pray in His name. Your prayers must be directed according to the will of God. Many of you do not know how to pray. Why don’t you start today by saying God have mercy upon me a sinner. Let Him forgive the past sins, transform your life and make you a new person. He can do it today in answer to the simplest prayer.