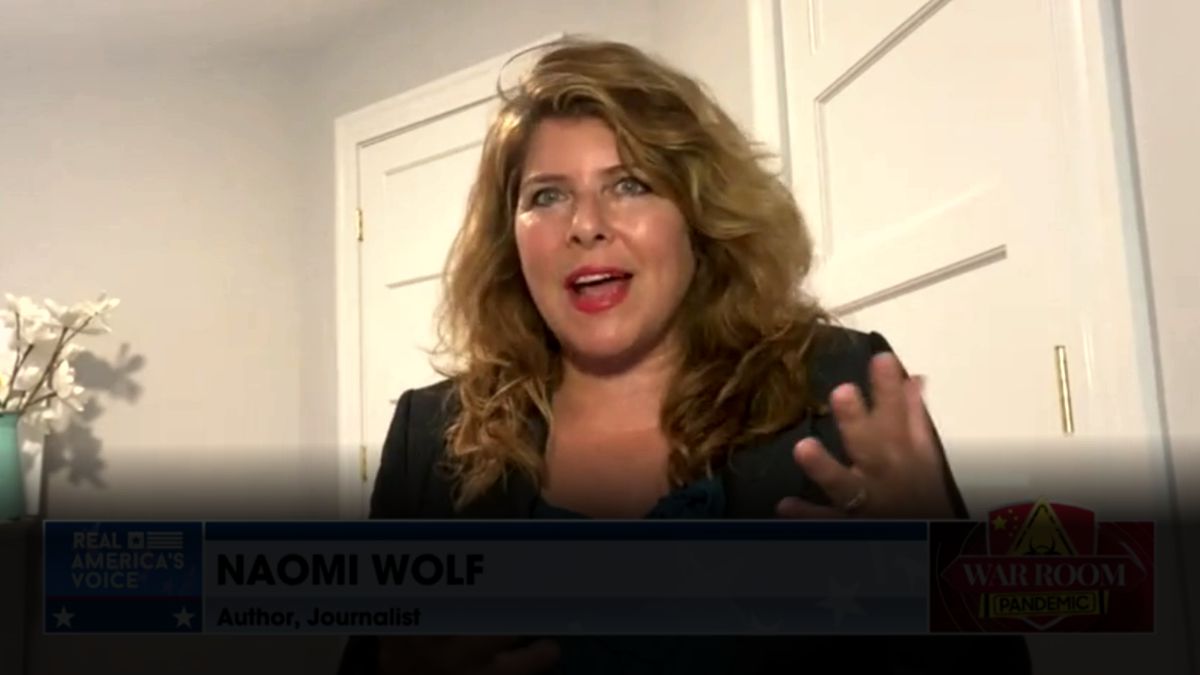 Vaccine Passports Will Cause the Economic Collapse of America

Liberal author Naomi Wolf’s DailyClout channel was abruptly deleted by YouTube after she posted an interview with a prominent critic of mandatory masking policies in schools.

“This censorship highlights the extreme clampdown on free speech and public discourse prevailing in the United States,” Wolf said in an Aug. 24 statement after the channel was eliminated.

Wolf, a co-founder of the DailyClout website, is a widely published journalist and bestselling author of books such as “The Beauty Myth: How Images of Beauty Are Used Against Women” (1990) and “The End of America: Letter of Warning to a Young Patriot” (2007). She was an adviser to then-President Bill Clinton’s 1996 reelection campaign and to then-Vice President Al Gore, both Democrats.

Twitter banned Wolf, who has been critical of vaccine passports and media coverage of the COVID-19 pandemic, earlier this summer, as The Epoch Times reported at the time. Twitter said Wolf had disseminated vaccine misinformation in violation of the microblogging website’s policies, a claim she denies.

Wolf said she can’t state with certainty why YouTube suppressed the DailyClout channel.

“We’re not partisan. We don’t support one side or the other. We literally exist to explain legislation and the legislative process and what’s in a bill. We read the stimulus bill and point out what’s in it. We read the health care bill and bullet point what’s in it,” Wolf said.

“We do the hard work of making civic engagement easy and accessible for everybody.”

YouTube sent DailyClout an email that advised that a video titled “Dr Naomi Wolf and Leslie Manookian speak about her award-winning documentary ‘The Greater Good,’” had been removed for violating YouTube’s “medical misinformation policy.”

“YouTube doesn’t allow claims about COVID-19 vaccinations that contradict expert consensus from local health authorities or the World Health Organization (WHO),” stated the Aug. 21 email, obtained by The Epoch Times.

The video featured an interview Wolf conducted with Manookian, who is president and founder of Health Freedom Defense Fund Inc. (HFDF). In the video, the two discussed apparent conflicts of interest at the National Institute of Allergy and Infectious Diseases (NIAID), which is run by Dr. Anthony Fauci. NIAID is part of the National Institutes of Health (NIH), which, in turn, is part of the U.S. Department of Health and Human Services (HHS).

The NIAID holds patents on COVID-19 vaccines, which has been documented by Public Citizen and Axios.

Manookian noted that NIH allows employees who hold patents to receive up to $150,000 per year per patent, and Wolf said there was a need for an open public discussion of this issue.

Wolf was deplatformed by Twitter after sharing with 146,000 followers the resume of UNC senior researcher Dr. Ralph Baric, which shows that his work on gain-of-function research had been funded by NIAID under Fauci. Vanity Fair also reported on the funding.

“I can’t stress enough … [that] I was reporting … on primary source public documents … reporting matters of public record,” as opposed to breaking actual news, Wolf said in the interview.

Wolf said both the Twitter and YouTube bans came as she was merely “reporting on successful legal efforts or legislative efforts to ban vaccine passports, to ban vaccine discrimination, or to change policy around mask mandates.”

“I don’t know why a successful channel that was bringing matters of public importance to viewers was deplatformed,” Wolf said.

“Many, many, many credible important voices are being deplatformed, a good proportion on the right—I happen to be on the left … and I am part of a lawsuit against big tech.”

“I believe that government is not allowed to use private industry to go around the First Amendment … and so if there’s any coordination there, that is unlawful and that’s what [the legal process of] discovery is for.”

Wolf said she was disturbed when President Joe Biden and his aides have raged against what they call misinformation.

“In a democracy, when a head of state … [engages in that] kind of finger-pointing, [such a thing] has no place in an open democracy with a First Amendment. It’s very dangerous,” she said.

“I think something very serious indeed is happening if a channel devoted to educating people from all walks of life, all political persuasions, every age, about democracy in America is closed down. That’s really serious.”

Officials at YouTube, which is owned by Google, didn’t immediately respond to a request by The Epoch Times for comment.