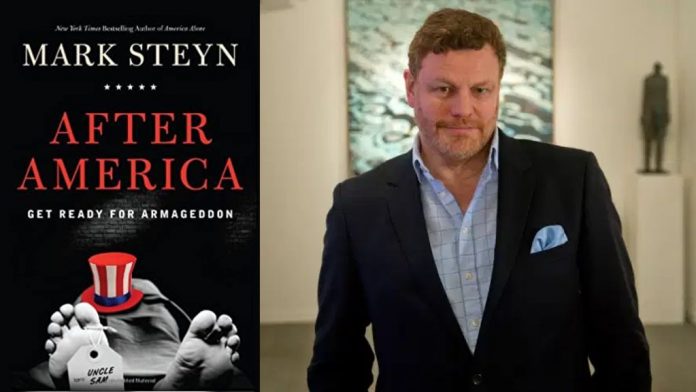 In his giant New York Times bestseller, America Alone: The End of the World as We Know It, Mark Steyn predicted collapse for the rest of the Western World. Now, he adds, America has caught up with Europe on the great rush to self-destruction.

It’s not just our looming financial collapse; it’s not just a culture that seems on a fast track to perdition, full of hapless, indulgent, childish people who think government has the answer for every problem; it’s not just America’s potential eclipse as a world power because of the drunken sailor policymaking in Washington—no, it’s all this and more that spells one word for America: Armageddon.

What will a world without American leadership look like? It won’t be pretty—not for you and not for your children. America’s decline won’t be gradual, like an aging Europe sipping espresso at a café until extinction (and the odd Greek or Islamist riot). No, America’s decline will be a wrenching affair marked by violence and possibly secession.

With his trademark wit, Steyn delivers the depressing news with raw and unblinking honesty—but also with the touch of vaudeville stand-up and soft shoe that makes him the most entertaining, yet profound, columnist on the planet. And as an immigrant with nowhere else to go, he offers his own prescription for winning America back from the feckless and arrogant liberal establishment that has done its level best to suffocate the world’s last best hope in a miasma of debt, decay, and debility. You will not read a more important—or more alarming, or even funnier—book all year than After America.

Praise for After America

“Mark Steyn is a modern day Jeremiah with a quiverful of devastating one-liners, nailing what the liberals have done to our country. He presents an alarming–and frighteningly convincing–prophecy of where we’re headed. The choice is stark–we either listen to Steyn and act on his recommendations or face economic and cultural armageddon.”
–Mark Levin

“Mark Steyn has done it again. In his new book, After America, he clearly defines the dangerous signals which show America is embracing the same doomed path as the failed European economies, and how vital it is to implement and avoid policies right now to prevent us from the same fate.”
–Sean Hannity

“Only Mark Steyn can write about the decline of America and leave you laughing.”
–Ann Coulter

Mark Steyn is the bestselling author of After America and America Alone. His writing on war, politics, the arts, and culture has appeared in almost every major newspaper around the world, from The Wall Street Journal to The Irish Times to The Australian. In the United States he is National Review’s “Happy Warrior,” as well as a regular guest-host on America’s number one radio show, The Rush Limbaugh Show, and America’s number two cable news show, Hannity on Fox News. He lives in New Hampshire.

Mark Steyn on “After America” Interview

An audio-only interview, originally uploaded at Ed Driscoll.com on the release date of Steyn’s new book, “After America.”

Last year, as the month of August began, I received a copy of Mark Steyn’s After America from his publicist on Wednesday, the Dow Jones dropped 512 points on Thursday, and S&P shorted America’s credit rating on Friday.

Mark’s crack team of publicists again earned their keep this year, staging riots across the Middle East, a feckless “Quantitative Easing” program by the Chairman of the Federal Reserve, and a First Amendment trampling POTUS, all in the past week, as a sort of extended infomercial to promote the new paperback edition of the book.