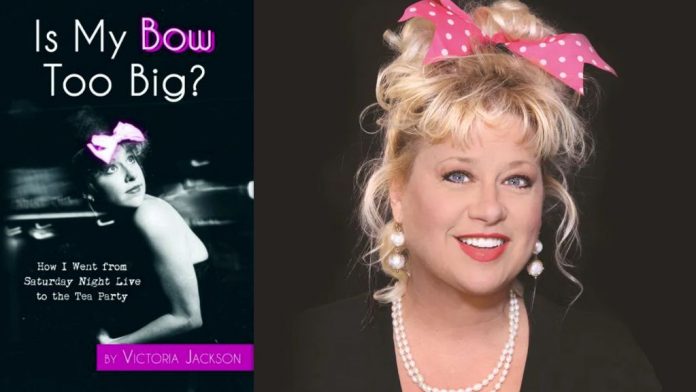 It’s not always the case that telling your own story is more truthful, or more personal, than having someone else tell it. We don’t always see ourselves accurately, and we tend to hide our own shame. Victoria Jackson’s Is My Bow Too Big? is a rare example of autobiography the way it could and should be — nuanced, intimate, poignant, and compelling.

No one knows more about what it’s like to be Victoria Jackson in all the various roles she has played than Victoria Jackson herself. And in this book, she doesn’t hold the reader at a safe distance. She doesn’t just tell you about her life … she invites you inside it.

Born in 1959, Victoria Jackson grew up in a Bible-believing, piano-playing, TV-free home in Miami. Her father coached gym, and she became a talented gymnast, even acquiring a college scholarship to Furman University. When Johnny Crawford (The Rifleman) met her at a summer stock production, he encouraged her to pursue acting and bought her a one-way ticket to Hollywood. For two years, she held odd jobs in the show-biz capital — as a cigarette girl, waitress, and even typist — until Johnny Carson noticed her stand-up routine and put her on The Tonight Show … twenty times. After that, she starred in many movies and TV shows, most notably six seasons on Saturday Night Live. In 2012, she began a partnership with Liberty Alliance, a conservative media group, to produce her political webshow, The Victoria Jackson Show.