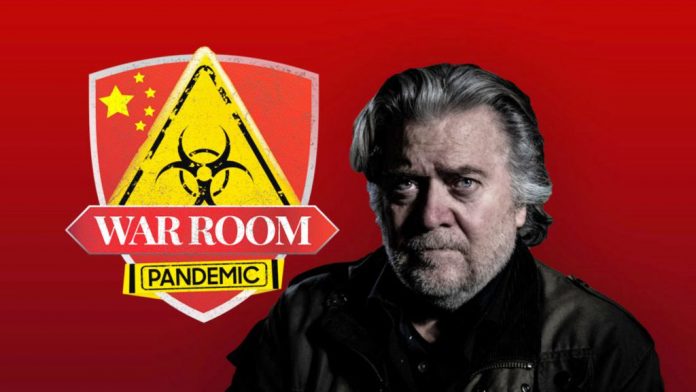 Ambitious Republicans are flocking to Steve Bannon’s podcast for the chance to demonstrate loyalty to Trump and audition for the former president’s support.

Steve Bannon has a new MAGA megaphone, and Republicans eager to shine in a party still tethered to former President Donald Trump know it.

Bannon, the former Breitbart News executive and one of the architects of Trump’s Make America Great Again movement, has increasingly leveraged his “War Room: Pandemic” podcast into a kind of proxy primary. Ambitious Republicans are flocking there for the chance to demonstrate loyalty to Bannon’s former boss and pitch themselves to Trump’s voters — and, more indirectly, to Trump himself.

With Fox News appearing to lose favor among some of Trump’s most diehard fans, “War Room” appears to be gaining steam as a safe space for the far right. It’s routinely among the most popular podcasts on Apple’s platform and streams live twice each weekday and once every Saturday through the Real America’s Voice network.

On this show, Joe Biden is not the real president, and the theory that Covid-19 leaked from a Wuhan, China, lab has been a hot topic for more than a year. Bannon encourages skepticism about vaccines one minute and peddles zinc and Vitamin D pills the next.

In an interview with NBC News, Bannon said candidates who appear will be pushed first and foremost on what he called “a litmus test” for the GOP: challenging the outcome of the 2020 election.

YouTube has banned Bannon’s podcast channel, citing concerns about the spread of false claims about election fraud. Nevertheless, Bannon has had little trouble booking guests, from MAGA celebrities such as the MyPillow creator to veteran lawmakers and candidates. They’re often reaching out to him, Bannon said, aware if they want to reach the Trump base, it’s a must-visit.

“We pride ourselves on being the most populist, most economic nationalist wing of this movement,” Bannon said.

On Sunday Steve Bannon sent The Gateway Pundit his response to the NBC News report:

The success of the show is all about the audience—- MAGA wants action; action they can be a part of and drive.

We don’t report stories — we build narratives over days, weeks, months. Working with Gateway Pundit, National Pulse, Revolver News, and many other news organizations we are able to amplify the great work being done for an engaged America First audience.

Full Forensic Audits of 2020; Wuhan Lab responsibility; Rejecting Mask Mandates, Forced Vaccinations in schools; an invasion on the southern Border; the collapse of the dollar because of Biden’s insane economic plan are just a few of the major events we cover — daily.