Home Keep Up China CCP Chart of the Day: 1 in 5 of China’s Urban Youth Unemployed... 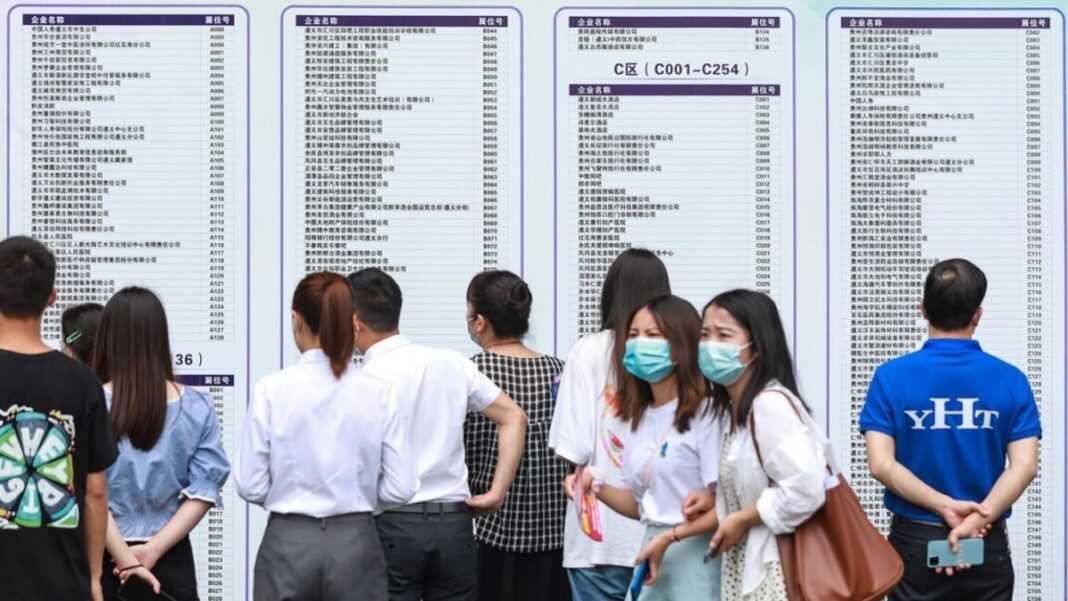 CNN International – The future looked promising for Cherry in May last year, when she secured a prestigious internship at a major software firm while still studying at a university in Wuhan. The company told her that she could start working for them full-time once she graduates.

But her situation changed dramatically this summer. Just as Cherry was about to graduate from university this year and start her job, she was told by the company that her offer had been rescinded as it had to “adjust” its business and cut staff.

“I think it’s because of the pandemic,” the 22-year-old said. “Most companies have been affected by Covid lockdowns this year.”

She asked to only be referred to as Cherry for fear of reprisals from future employers.

A sweeping crackdown by Beijing on the country’s private sector, which began in late 2020, and its unwavering commitment to a zero-Covid policy have hit the economy and job market hard.

“Us fresh graduates are definitely the first batch of people to be laid off because we just joined the company and haven’t made many contributions,” Cherry said. A record 10.76 million college graduates entered the job market this year at a time when China’s economy is losing the ability to absorb them.

The youth unemployment rate has repeatedly hit new highs this year, rising from 15.3% in March to a record 18.2% in April. It continued to climb for the next few months, reaching 19.9% in July. The rate fell slightly to 18.7% in August but still remains among the highest ever.

With a record 10.8 million Chinese set to graduate from college by the end of the year, competition for positions is only getting fiercer. One unemployed 2021 graduate was recently alarmed to discover some job postings are now open only to 2022 and 2023 grads. While job applications soared a staggering 135%, job advertisements in the second quarter plummeted by 19%, compared to 2021.

So how does the Chinese economy look going forward from here? A monthly purchasing managers’ index released by business news magazine Caixin fell to 48.1 from August’s 49.5 on a 100-point scale in which readings below 50 indicate activity contracting. See this in the chart below and learn more here.

“The surveys suggest that China’s economy continued to lose momentum,” Zichun Huang of Capital Economics said in a report. That adds to complications for Chinese leaders who are trying to reverse an economic slump after GDP growth fell to 2.2% in the first six months of 2022, less than half the 5.5% official target.

The Chinese economy advanced 0.4% YoY in Q2 of 2022, missing the market consensus of 1.0% and slowing sharply from a 4.8% growth in Q1. The latest figure was the softest pace of expansion since a contraction in Q1 2020 when the initial coronavirus outbreak emerged in Wuhan. China’s statistics agency described the result for Q1 as “hard-earned achievements” and warned about the lingering impact of outbreaks and “shrinking demand” at home.” See this in the chart below and learn more here.

With this rather dim economic outlook in China, what will President Xi of China do with the youth of his country? Perhaps the following video will give us some clues.

Like so many times in history, when leaders want to cover up their own mismanagement of their economies – they send the kids off to war. What this means for the youth in the rest of the world is not good either.

Idle hands are the devil’s workshop.