Home Opinion Thought Spot Essay No. 1 of The Federalist Papers for the 21st-Century Reader 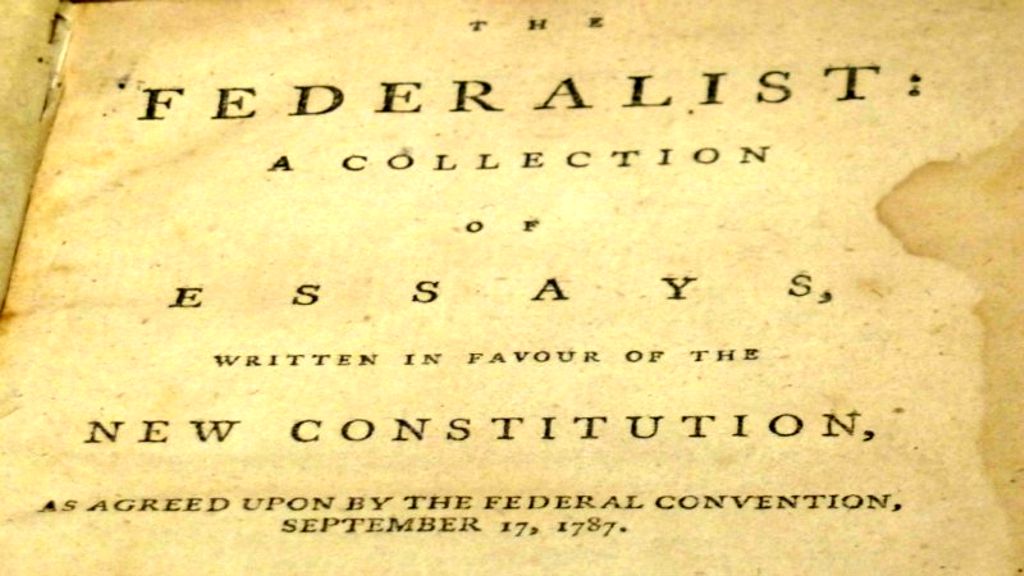 THE FEDERALIST PAPERS, ESSAY NO. 1: INTRODUCTION BY ALEXANDER HAMILTON; TRANSLATED INTO MODERN-DAY LANGUAGE BY NATALIE MORRIS.

After realizing for a long time that our present government is inadequate, you are invited to consider a new constitution for the United States of America.[i] This is especially important when we realize that the effects of a new government will show if the Union is able to survive. A new government could result in the security and well-being of the states. In many ways this is the fate of the most interesting nation in the world. Often people have said that this decision has been reserved for the people of the United States; and the people’s behavior and example will show whether men can choose their own government or will always have to depend on accidents and force. If these things are true, the current trouble can be thought of as the time we are to make that decision. When we think of it in this way, we realize that if we make the wrong decision, it will be unfortunate for all future generations.

This idea, plus genuine patriotism and concern for mankind, should encourage all good men to feel interested in choosing a new government. It will be wonderful if our choice is influenced by a careful examination of the things which really concern the good of our nation. Though we really want to be influenced entirely in the right way, we cannot expect this since the new plan affects so many different people, things, and local organizations (and nothing is too unimportant to be discussed).

However, I do not mean to dwell on these things. I realize that it would be insincere to carelessly assume that certain officials—just because their present stations may seem suspicious to us—are against the new plan and are only trying to seek more power from a change in government. We must be fair by saying that sometimes even these kinds of men are motivated by good intentions. And we cannot doubt that a lot of the opposition to the new constitution, which we already see or will see later, will come from places that are innocent and even respectable. This happens because people’s minds are prone to making honest mistakes when affected by things like jealousy and worry. There are many powerful causes which can give the wrong idea to our good sense. Because of this we often see wise and good men on both the wrong and right side of questions of importance to the world. If we can grasp this, we will be able to show patience to confused people who believe they are in the right. Another reason for being cautious about these things is that we are not always sure that people supporting the truth are motivated by principles any better that those of their opposers. Many things—want of power, greed, personal arguments, opposition of political parties[ii]—are going to influence both those for, and against, the right side of a question. Even if there were not these things to try our patience, nothing is worse than the unbearable attitudes found in opposing political parties. For in politics as well as religion, it is ridiculous to try to make a person change his opinions by persecution, since this rarely works.

Still, even though sincere men understand this, we already know that the influences mentioned above will be present in our case just as they have in all previous cases relating to important national questions. Many angry tempers will be loosed. We can see from the way the opposing parties are behaving that both will want to tell us that their party is right. To gain supporters, those opposing the government will be branded as one who only wants power and is hostile to liberty. Being overly protective of the rights of the people (this is usually the fault of the mind, not of the heart) will be interpreted as fake. On one hand, we can forget that where there is love, there is jealousy; and this reminds us that the noble trait of patriotism is too often labeled as being suspicious. On the other hand, we also might forget that an active government is needed to protect liberty. And when carefully considered, the things concerning an active government and liberty cannot be separated. Also, dangerous reasons more often hide behind a disguise of “love for the rights of the people” than “love for efficient government.” History shows that of the two, love for the rights of the people can often be the first to introduce tyranny. History reveals that most of the men who ruined the freedoms of nations began their careers by being sympathetic with the people and denouncing tyrants.

So far, I have tried, fellow citizens, to put you on your guard against any attempts to influence you from anything but the truth in this choice of your future well-being. You are probably now aware of most of the bad influences and the fact that they could even come from people that seem friendly to the proposed plan. Yes, my countrymen, I admit that after thinking about the plan, I am positive that it is best for you to accept it. I am convinced that your liberty, dignity, and happiness will be safer if you do. I do not have any hesitations about it. I will not pretend I am still thinking it over when I have already decided. I will be frank and tell you my feelings and will freely give my reasons supporting them. Knowing one’s good intentions can take away uncertainty. However, I will not keep repeating these things; my motives will stay in my heart. My arguments, which are for everyone to hear, can be judged by everyone. At least my arguments will be lively, and truthful.

In a series of papers, I intend to discuss the following:

Throughout this discussion I will try to give satisfactory answers to all the objections people have made to the new plan.

It might seem unnecessary to argue that a UNION is useful, since it appears that everyone agrees with this fact; and we would be surprised if it were opposed. But in fact, in the private circles we already hear opposition to the new constitution. The rumor is that the thirteen states are too big to be under one government and instead should form several confederacies. Most likely this rumor will be spread until many people agree with it. It is clear to those who study this subject that we must either choose the new constitution or shatter the union. So, it is particularly necessary to examine both the advantages of having a union of states and the danger in which every state will be if there is no union. And now we shall do that.—PUBLIUS[iii]To read the original version of Essay No. 1, click here: https://founders.archives.gov/documents/Hamilton/01-04-02-0152

[i] The purpose of The Federalist Papers was to defend and explain the new constitution.

[iii] Publius was the name under which all three writers of the Federalist Papers—Alexander Hamilton, James Madison, John Jay—singed the essays.

[1] The purpose of The Federalist Papers was to defend and explain the new constitution.