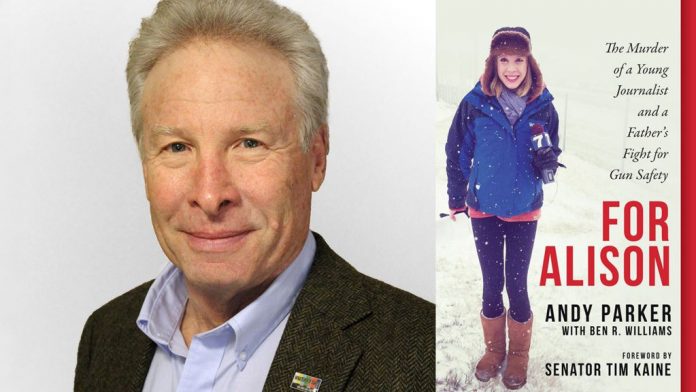 Renowned activist Andy Parker’s account of the story that shocked America, the murder of his daughter, reporter Alison Parker, on live television, and his extraordinary ensuing fight for commonsense gun safety legislation and doing “Whatever It Takes” to end gun violence.

On August 26, 2015, Emmy Award–winning twenty-four-year-old reporter Alison Parker was murdered on live television, along with her colleague, photojournalist Adam Ward. Their interviewee was also shot, but survived. People watching at home heard the gunshots, and the gunman’s video of the murder, which he uploaded to Facebook, would spread over the internet like wildfire.

In the wake of his daughter’s murder, Andy Parker became a national leader in the fight for commonsense gun safety legislation. The night of the murder, with his emotions still raw, he went on Fox News and vowed to do “Whatever it Takes” to end gun violence in America. Today he is a media go-to each time a shooting shocks the national consciousness, and has worked with a range of other crusaders, like Congresswoman Gabby Giffords, Mayor Michael Bloomberg, and Lenny Pozner, whose son was killed at Sandy Hook Elementary School and brought suit against Alex Jones and Infowars, who claimed the shooting was staged. In For Alison, Parker shares his work as a powerhouse battling gun violence and gives a plan for commonsense gun legislation that all sides should agree on. He calls out the NRA-backed politicians blocking the legislation, shares his fight against “truthers,” who claim Alison’s murder was fabricated, and reveals what’s ahead in his fight to do whatever it takes to stop gun violence.

Parker’s story is one of great loss, but also resilience, determination, and a call to action. Senator Tim Kaine, also a fierce advocate for commonsense gun laws, contributes a moving foreword.

“This is a wonderful book, a beautiful tribute.”
—Willie Geist, MSNBC

“I couldn’t put this book down. I read it all in one sitting.”
—Dana Perino, Fox News

“This book sends a powerful and inspiring message on the importance of the fight to end gun violence. The strength Andy has shown in turning a tragedy into a force for good in order to make this country and the world a safer place should be an example for us all.”
—Senator Mark Warner, US Senator from Virginia

“Andy Parker has written a beautiful and important book that grabs your heart with the first sentence and never lets go. I couldn’t stop turning the pages with Andy Parker’s humanity guiding me through this story as if I was sitting at his kitchen table just listening.”
—Lawrence O’Donnell, Host of The Last Word with Lawrence O’Donnell

“Andy Parker suffered the unimaginable loss of his daughter to gun violence. His exemplary activism in gun safety is a testament and a tribute to his great love for her.”
—Julianne Moore, Actress and Chair of the Creative Council of Everytown for Gun Safety

“A tragic, revealing, and important book that every American needs to read. I thank the Parkers for their courage to take on the gun lobby and fight for justice.”
—Terry McAuliffe, Former Governor of Virginia

“Fast paced and riveting, Andy Parker is a gifted storyteller. More importantly, he’s an angry father who has written a brilliant book that tells the brutal truth.”
—Donna Dees, Founder of the Million Mom March

“In this no-holds-barred account, Andy makes you feel the pain, the anger, and the longing of a parent who has lost his whole world then uses his considerable gifts as a storyteller to make the reader want to jump up and do something to stop gun violence. This book is an uncensored call to action that cannot be ignored.”
—Joshua Horwitz, Executive Director of the Coalition to Stop Gun Violence

“This is a book meant for all of us—a wakeup call to a nation devastated on a daily basis by senseless gun violence—as seen through the eyes of a parent who became a member of the club that no one wants to join. Andy’s courageous struggle to ‘make something meaningful out of a meaningless death’ is a call to action on gun violence prevention.”
—Levar M. Stoney, Mayor of Richmond, VirginiaRead less

Andy Parker is the father of Alison Parker, a journalist killed on live television, and a national gun reform advocate who has appeared on all major news networks—CNN, MSNBC, CBS, ABC, NBC, and Fox News—on programs such as CBS Sunday Morning, Face the Nation, Anderson Cooper 360, Hardball with Chris Matthews, The Last Word With Lawrence O’Donnell, and many more; he has written op-eds for a variety of publications, such as Washington Post, New York Daily News, Medium, CNN.com, Huffington Post, and Newsweek; and has been interviewed for publications ranging from the New York Times to Time magazine. Together with his wife, Barbara, Parker runs the For Alison Foundation, which creates opportunities for children in southern Virginia to experience the arts. He lives in Martinsville, VA.

Senator Tim Kaine has represented the Commonwealth of Virginia in the United States Senate since 2013. He was the Democratic Party’s nominee for Vice President of the United States in the 2016 election, running alongside Hillary Clinton, and the governor of Virginia from 2006 to 2010. Senator Kaine lives in Richmond, VA.

Ben R. Williams is a writer and editor, and formerly a reporter at the Martinsville Bulletin. He has won several Virginia Press Association awards for news coverage, column writing, and photography. He lives in Bassett, VA.