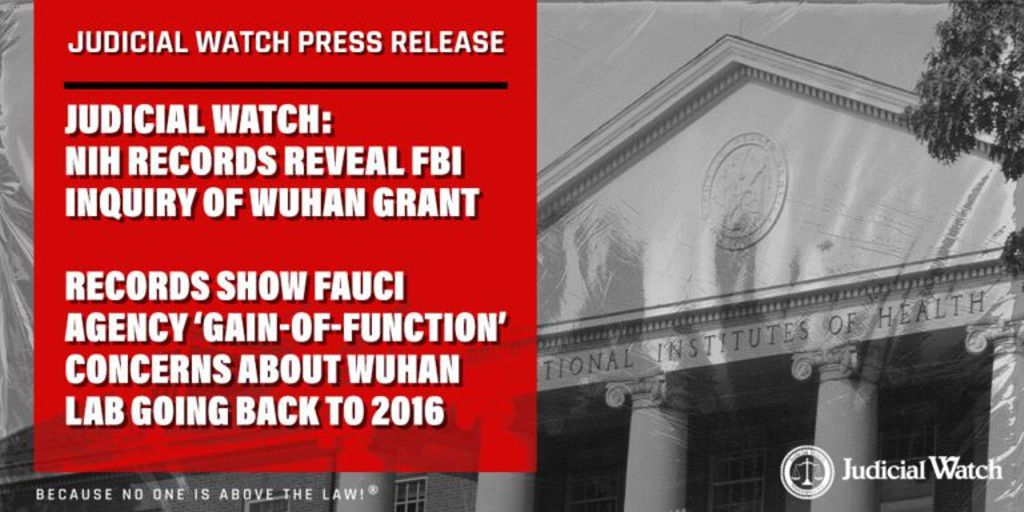 (Washington, DC) Judicial Watch announced today that it received 1651 pages of records from the National Institutes of Health (NIH) revealing an FBI “inquiry” into the NIH’s controversial bat coronavirus grant tied to the Wuhan Institute of Virology. The records also show National Institute of Allergy and Infectious Diseases (NIAID) officials were concerned about “gain-of-function” research in China’s Wuhan Institute of Virology in 2016. The Fauci agency was also concerned about EcoHealth Alliance’s lack of compliance with reporting rules and use of gain-of-function research in the NIH-funded research involving bat coronaviruses in Wuhan, China.

The records also show EcoHealth Alliance’s legal team suggesting that a records request for data on their bat coronavirus research in Wuhan be denied because of the January 6 disturbance.

Judicial Watch obtained the records through a Freedom of Information Act (FOIA) lawsuit for records of communications, contracts and agreements with the Wuhan Institute of Virology (Judicial Watch, Inc. v. U.S. Department of Health and Human Services (No. 1:21-cv-00696)).

In an email dated May 22, 2020, with the subject line, “Grant Questions – FBI Inquiry – 1-R01A1I110964-01 – 2-R01AI110964-06,” Ashley Sanders, a senior investigations officer in the NIH Division of Program Integrity, within NIH’s Office of Management Assessment, emails David A. Miller, an agent at the FBI’s Newark Field Office to inform Miller, “In preparation for our call on Tuesday, Erik [Stemmy] (cc’d) has provided responses to your initial questions below (also attached).” Also copied on Sanders’ email is Mike Shannon, whose email address indicates he works in the NIH Office of the Director. The responses are completely redacted but are labeled “SF [Standard Form] 424 AI110964-06 (received date 11/05/2018),” which refers to NIH grant award R01AI110964, “Understanding the Risk of Bat Coronavirus Emergence.”

The records reveal several indications of gain-of-function research, as well as failures to comply with reporting regulations, including a May 9, 2016, email marked “High” importance, in which NIH official Carine Normil notes Peter Daszak’s failure to file a progress report on EcoHealth’s bat coronavirus research:

This is the second communication from NIAID requesting that you file the progress report for the above-referenced grant [5R01AI110964] that was due no later than April 15, 2016. Please submit the delinquent report by May 12, 2016…. [P]lease be advised that continued late submission of your non-competing grant progress report and any subsequently requested documentation will result in a reduction of time and/or funds for this grant.

NIAID official Erik Stemmy, who is copied on her email, replies to Normil noting, “They have proposed work for the next year of the award that may be subject to the gain-of-function funding pause.”

EcoHealth Alliance Chief of Staff Alexa Chmura separately responds to Normil saying, “We received a warning that one of the publications [redacted] listed from the past year is non-compliant.”

In a letter dated May 28, 2016, from NIH official Jenny Greer and NIH Program Manager Erik Stemmy, the officials advise Chmura that the NIH grant for the Wuhan bat project, “may include Gain of Function (GoF) research that is subject to the U.S. Government funding pause … issued on October 17, 2014.” They add that this pause was based on the following line in the grant application: “Aim 3: Testing predictions of CoV inter-species transmission.”

In an email dated June 15, 2016, from Stemmy to Grant Operations, Stemmy notes that the EcoHealth bat research at WIV may include gain-of-function research: “The Daszak award may have GoF [gain-of-function] and I’ve been in touch with the GMS [Grants Management Specialist] for a while now.”

In an email dated August 3, 2021, EcoHealth Alliance Chief of Staff Aleksei Chmura sends an email to NIH officials with the subject line “5 ROl AI110964 (Interim Report),” which is the grant number for the “Understanding the Risk of Bat Coronavirus Emergence” program. The report, which seems to detail gain-of-function research, is attached:

To analyze which viruses were a potential public health risk, we managed to cultivate three strains of SARSr-CoVs from bat feces… We used the genetic codes of some of the other viruses we found in bats and inserted spike protein genes of those viruses (the proteins that attach to cells) into the cultured viruses. By doing this experiment we showed that other viruses may also be able to infect human cells, and were able to do this safely without the need to culture large amounts of virus…. This work proves that there is a clear and present danger for future emergence of novel SARS-like viruses in people.

Records in 2020 include an April 21 NIH email thread regarding “additional subawardees,” referring to NIH grant award R01AI110964 “Understanding the Risk of Bat Coronavirus Emergence.” Ten facilities are listed including:

Also in this thread, on April 21, 2020, senior NIH official Matthew Fenton advises his NIH colleagues that in the EcoHealth Wuhan bat project’s grant, the WIV received $76,301 one year, the Institute of Pathogen Biology in Beijing received $75,600 and the East China Normal University in Shanghai received $49,750.

In an October 23, 2020, letter NIH Deputy Director Michael Lauer notes to Daszak that the Wuhan Institute of Virology had not satisfied safety requirements that applied to subawards with EcoHealth:

In an email dated April 11, 2021, and flagged as “High” importance, Daszak acknowledges that he knows FOIA requests would be inevitable for information on EcoHealth’s work.

I’ve tried to stick to a logical argument, but I’m also mindful of the dozens of FoIA requests targeting EHA [EcoHealth Alliance] and myself and that previous letters have been leaked to the press, so have made sure all details are laid out. I do not aim to make this letter public, of course and am sending this to you confidentially.

In an email and letter both dated April 11, 2021, Daszak informs Lauer that it would be difficult to get the information Lauer requested about the Wuhan bat project because of the termination of EcoHealth’s funding:

This termination of a funded relationship with the [Wuhan Institute of Virology] makes it extraordinarily difficult and more likely impossible to provide the information requested about an autonomous foreign organization – as would also be the case for a domestic one – that our organization neither works with currently, nor has control over.

Daszak further states that NIH’s FOIA officer, Gorka Garcia-Malene, had informed Daszak that “any indication from my program [NIH FOIA Office] that there is an ongoing investigation into WIV [Wuhan Institute of Virology] can now be disregarded, as we recently confirmed there are no pending investigations into that organization.” [Emphasis in original]

NIH asks EcoHealth to “Provide [a sample] of the actual SARS-CoV-2 virus that WIV used to determine the viral sequence.” Daszak responds that it would be “effectively impossible” to request such a sample.

In response to NIH’s requirement to provide copies of all WIV biosafety reports from June 1, 2014, through May 31, 2019, Daszak writes, “Given the intense geopolitical pressure around the accusations that WIV intentionally or accidentally released SARS-CoV-2 (something which the WHO mission deemed ‘extremely unlikely’), obtaining such information is not a plausible option at present.” Daszak includes email correspondence between the law firm representing EcoHealth and NIH’s FOIA office on January 25, 2021. When NIH sought assistance from EcoHealth in processing a FOIA request, the law firm’s representative said the FOIA request should be denied because of the January 6 disturbance: “[A]s demonstrated by the recent attack on the US Capitol fueled by disinformation and conspiracy theories, the need to protect the privacy of EcoHealth Alliance’s employees and affiliates is more important than ever.”

In a letter dated April 13, 2021, Lauer indicates that Daszak has failed to provide all reports and documents that NIH had previously asked him to produce regarding NIH grant R01AI100964. Lauer also cites the contract language requiring Daszak to provide these documents.

In a letter dated July 23, 2021, from Lauer to Daszak and Chmura, Lauer requires EcoHealth to produce detailed records relating to three of their NIH awards including the Wuhan Risk of Bat Coronavirus Emergence project as well as grant U01A/151797, titled Understanding Risk of Zoonotic Virus Emergence in EID Hotspots of Southeast Asia involving Chulalongkorn Hospital and Chulalongkorn University in Thailand, Duke-National Singapore University and University of North Carolina-Chapel Hill; and grant U01A/153420 involving the International Center for Diarrhoearal Disease Research of Bangladesh, Institute of Epidemiology Disease Control and Research of Bangladesh. Lauer writes:

For us to continue our analyses, we will need to receive and review WIV’s [Wuhan Institute of Virology] records validating expenditures specific to R01AI100964 … that WIV submitted to you. As a reminder, subawardees are required to have a financial management system that includes records that identify adequately the source and application of funds for federally-funded activities.

Lauer informs Daszak that the NIH had determined EcoHealth to be out of compliance:

We are also writing to notify you that a review of our records for R01AI100964 [the Wuhan bat project] indicates that EcoHealth Alliance, Inc. is out of compliance with requirements to submit the following reports that are outlined in the NIHGPS [National Institutes of Health Grants Policy Statement]: the Federal Financial Report … and the Interim Research Performance Progress Report …

Lauer adds that the grant was issued under a “Streamlined Noncompeting Award Process (SNAP)” and that EcoHealth Alliance had not submitted a required report that was due months earlier. Lauer warns Daszak, “[A] history of non-compliance related to R01AI100964, including reporting non-compliance, may impact other projects where EcoHealth serves as the primary grant recipient.”

(The NIH in April 2020 suspended funding to EcoHealth Alliance that “had previously established a partnership with a virology laboratory in Wuhan, China,” but in August 2021 provided a grant of $7.5 million that would reportedly “focus on Southeast Asia and the emergence of coronaviruses; filoviruses, the family responsible for Ebola; and paramyxoviruses, a family of viruses that includes measles and mumps.”)

“The incredible disclosure of an FBI inquiry shows that Fauci and others involved in this scandal were being dishonest in dismissing the seriousness of questions about their cover-up of their funding of dangerous gain-of-function research in China,” stated Judicial Watch President Tom Fitton. “Any FBI inquiry would be appropriate as these documents, extracted by Judicial Watch after years of stonewalling, also show that Fauci’s agency knew and should have known, going back to 2016, that it funded dangerous and prohibited gain-of-function research in China,”

Previous disclosures from this lawsuit include:

Through FOIA requests and lawsuits, Judicial Watch has uncovered a substantial amount of information about COVID-19 issues: