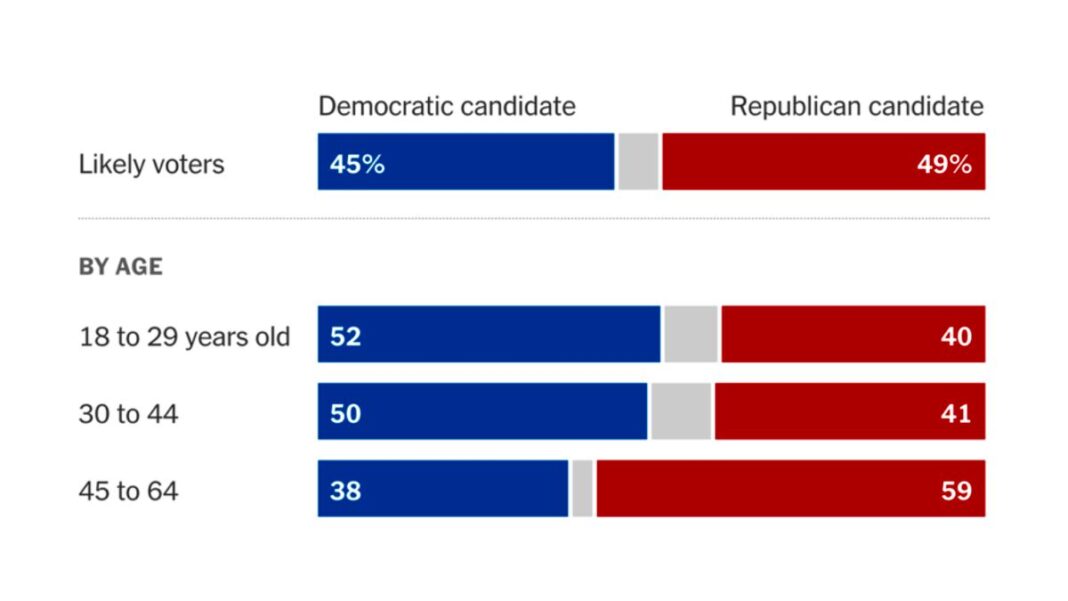 With elections next month, independents, especially women, are swinging to the G.O.P. despite Democrats’ focus on abortion rights. Disapproval of President Biden seems to be hurting his party.

Republicans enter the final weeks of the contest for control of Congress with a narrow but distinct advantage as the economy and inflation have surged as the dominant concerns, giving the party momentum to take back power from Democrats in next month’s midterm elections, a New York Times/Siena College poll has found.

The poll shows that 49 percent of likely voters said they planned to vote for a Republican to represent them in Congress on Nov. 8, compared with 45 percent who planned to vote for a Democrat. The result represents an improvement for Republicans since September, when Democrats held a one-point edge among likely voters in the last Times/Siena poll. (The October poll’s unrounded margin is closer to three points, not the four points that the rounded figures imply.)

With inflation unrelenting and the stock market steadily on the decline, the share of likely voters who said economic concerns were the most important issues facing America has leaped since July, to 44 percent from 36 percent — far higher than any other issue. And voters most concerned with the economy favored Republicans overwhelmingly, by more than a two-to-one margin.

Both Democrats and Republicans have largely coalesced behind their own party’s congressional candidates. But the poll showed that Republicans opened up a 10-percentage point lead among crucial independent voters, compared with a three-point edge for Democrats in September, as undecided voters moved toward Republicans.

The biggest shift came from women who identified as independent voters. In September, they favored Democrats by 14 points. Now, independent women backed Republicans by 18 points — a striking swing given the polarization of the American electorate and how intensely Democrats have focused on that group and on the threat Republicans pose to abortion rights.

The survey showed that the economy remained a far more potent political issue in 2022 than abortion.