Home Previews Books Standing Up to Goliath: Battling State and National Teachers’ Unions for the... 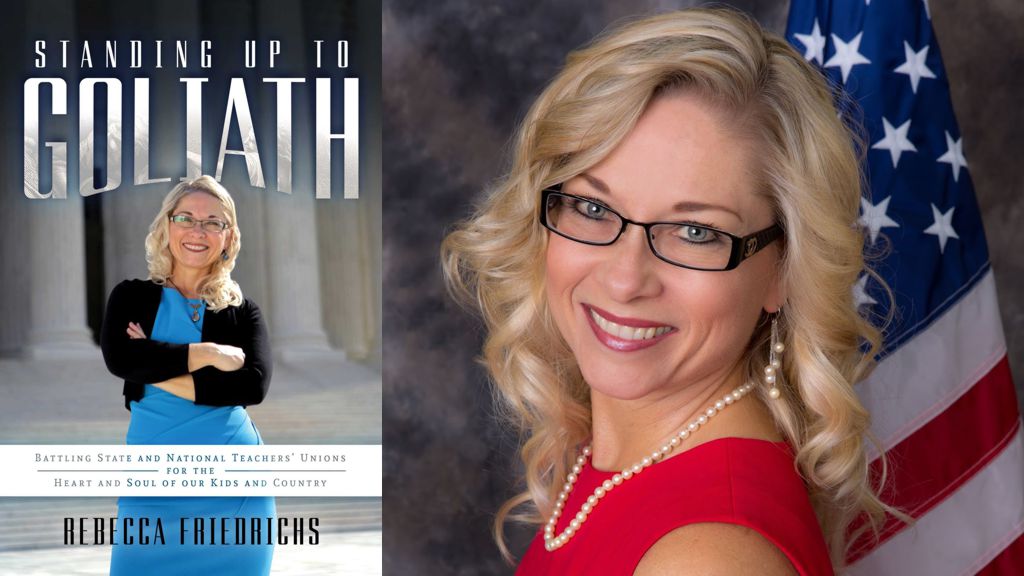 In Standing Up to Goliath, Rebecca Friedrichs tells real-life stories that expose state and national teachers’ unions as the money and muscle behind the degradation of America’s schools and culture.

In a book, Standing Up to Goliath, that’s both accessible and enlightening, Rebecca Friedrichs recounts her thirty-year odyssey as an elementary school teacher who comes face-to-face with the forces dividing and corrupting our schools and culture—state and national teachers’ unions. An exciting true story that features real life testimonies of teachers, parents, and kids, as well as political and social commentary, Rebecca’s journey leads her to the realization that the only hope for America’s schools and families is returning authority to parents and teachers while lessening the grip of state and national unions that:

These insights and more led Rebecca and nine other teachers to the US Supreme Court where their case, Friedrichs v California Teachers Association, et al., sought to restore the First Amendment rights of all teachers and government employees. They argued no one should be forced to pay fees to abusive, politically driven unions, and were poised to change the very landscape of American education—until tragedy struck.

Saddened but unbowed, Rebecca started a national movement, For Kids and Country, leading the charge of servant leaders who believe Judeo-Christian values (including kindness) and restoration of the teaching profession—possible only by rejecting state and national unions and forming “local only” associations—are the answers to America’s woes. She invites you to join them.

“America’s teachers, parents, and kids deserve better,” Rebecca writes. “If we want freedom, we’re going to have to fight for it.”

“Friedrichs masterfully weaves the personal and the political. A must read! Warning: Not easy to put down!”
Author: Larry Sand, President, California Teachers’ Empowerment Network

“Standing Up to Goliath is a brave and enormously important book. A blow-by-blow account of arguably the most meaningful battle of our times—the ongoing fight for the nation’s children against the all-powerful teachers’ unions—it is simultaneously a deeply affecting personal memoir. Rebecca Friedrichs did not sign up to be a hero, but circumstances, and her own indomitable will, made her one. It should be mandatory reading for parents, and anyone else concerned with America’s future.”
Author: Harry Stein, Contributing Editor, City Journal

“I laughed, I cried, I pounded my fist. I felt inspired, encouraged—and ready to keep battling. My heart was pierced when I realized the harm the sexxx ed would do to students who have already been victims of sexual abuse. I’ll die before anyone does that to my students.”
Author: Kate Bowers, Elementary School Teacher

“A forceful documentary on the power of public employee unions to use union dues to destroy; not only our public education system, but to buy our children’s political future.”
Author: CUSD Watch

Rebecca Friedrichs a twenty-eight-year public school teacher, was forced to fund state and national teachers’ unions whose politics and divisive tactics degraded her profession, our schools, and our national character.

Her lawsuit, Friedrichs v California Teachers’ Association, which sought to free teachers from forced unionism, was argued before the U.S. Supreme Court in 2016.

Poised to rule 5-4 in Rebecca’s favor, the Court deadlocked after the death of Justice Scalia.

Determined to stop state and national unions from destroying our schools and American values, Rebecca refused to give up.

Standing Up to Goliath, told through dozens of powerful personal accounts, is Rebecca’s expose of bully unions.

She’s a Prager University host, and founded For Kids and Country a national movement of parents, teachers, students, faith leaders, and citizens uniting to restore our schools and culture.