The $1.3 billion defamation suit against Lindell can now proceed.

The Supreme Court on Monday declined to hear MyPillow CEO Mike Lindell’s appeal in his defamation lawsuit against Dominion Voting Systems, the election machine company that he said rigged the 2020 election against former President Donald Trump.

Dominion sued Lindell over his allegations. The $1.3 billion defamation suit can now proceed because the Supreme Court declined to hear the appeal, The Hill newspaper reports.

Lindell, a close ally of Trump, has asserted that the election was stolen. He sued Dominion last year following the election company’s defamation lawsuit. At the time, Lindell claimed Dominion “weaponized the legal process and intimidated witnesses to election fraud” as part of an attempt to “cover up gross security flaws in their electronic voting systems.”

The voting company is also pursuing cases against former Trump lawyers Sidney Powell and Rudy Giuliani for their claims about the 2020 election, but the attorneys did not participate in Lindell’s appeal. 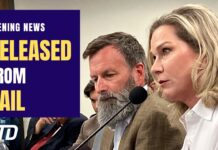