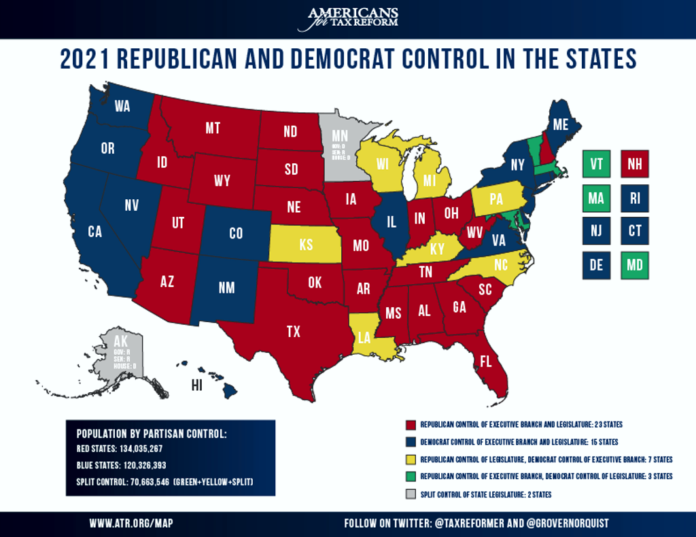 According to a new study released by Wallethub ranking the least and hardest working states, the top 10 are primarily run by Republicans and the bottom 10 are mostly run by Democrats. Some of the metrics used range from average workweek hours to share of workers with multiple jobs to annual volunteer hours per resident.

The same rings true when looking at the states with the highest and lowest unemployment rates across the country.

#1 goes to Alaska as the hardest working state in the country with a score of 68.63. Republicans hold a state trifecta in the Alaska State Legislature, meaning Republicans have control of the State House, Senate and governorship.

#2 is North Dakota with a score of 68.26. North Dakota also has a Republican trifecta, holding control in the two chambers and governor’s office.

#3 is Nebraska with a score of 60.45. The state is completely controlled by Republicans.

#4 goes to South Dakota scoring 56.81. South Dakota has a state trifecta by a large margin. with 62 of 70 House seats being held by Republicans and also hold 32 of 35 Senate seats.

#5 is my home state, Texas with a score of 55.83. In Texas we have a state trifecta, Republicans control both chambers and the governor’s office. Woo hoo!

#6 is the beautiful Wyoming with a score of 55.71 where Republicans dominate the state.

#7 goes to Oklahoma, having a score of 54.92. Republicans have as state trifecta in Oklahoma.

#8 belongs to Virginia which has a score of 53.66. Virginia is the only state in the top 10 which has a Democrat trifecta.

#9 is New Hampshire with a score of 52.77. New Hampshire is controlled by Republicans in the House, Senate and the governor’s office.

#10 is Kansas scoring 51.78. Kansas has a divided government. The State House and Senate are controlled by Republicans while having a Democrat governor.

#41 goes to Massachusetts with a score of 35.4. Massachusetts is dominated by Democrats in the 2 chambers but have a Republican governor.

#44 belongs to Oregon with a score of 34.27. No surprise here with all we see that goes on in Portland, Democrats also have a state trifecta here.

#45 is Michigan with a score of 33.49. Republicans control both the House and Senate but also have one of the worst governors in the country, Gretchen Whitmer (D).

#47 goes to Connecticut with a score of 30.87. Connecticut is controlled by Democrats in the State House, Senate and governor’s office.

#48 belongs to New York scoring 30.60, ouch. I don’t think it is any surprise that government in New York belongs to Democrats.

#49 is West Virginia with a score of 30.11. West Virginia is the only state in the bottom 10 which has a Republican trifecta in its government.

#50 goes to…drumroll please….New Mexico with an embarrassing score of 29.53. New Mexico has a Democratic state trifecta.

What about the unemployment in red versus blue states?

If you are looking at other numbers in your search for red versus blue states, here are some other statistics that give you a picture of where they are economically.

Here are the top 10 states with the lowest unemployment rates according to the Bureau of Labor Statistics:

#43: The District of Columbia was added to the rankings with an unemployment rate of 6.7%

Of the 10 states with the highest unemployment rates, only 2 have a Republican trifecta.

Well there you have it in your red states versus blue states analysis on the unemployment rate and hard work.

Note, I am not discrediting people in states which ranked near the bottom of this study as there are hard working individuals in every state.