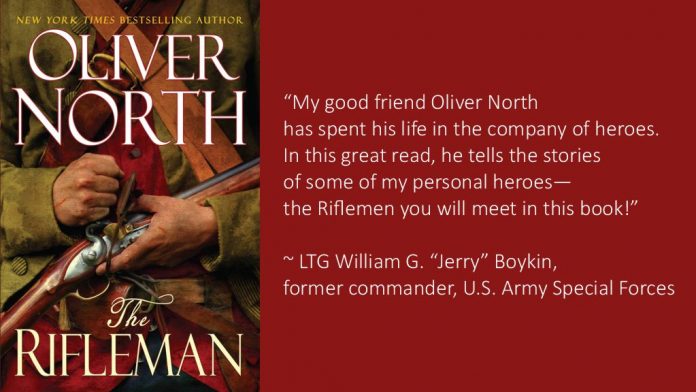 The Rifleman by Oliver North is a gripping, fact-based story of how Daniel Morgan and his courageous riflemen played a crucial role in George Washington’s victory in the American Revolution.

The Rifleman by Oliver North is a war story. It’s about real people and events before and during the American Revolution. The central characters in this work—Daniel Morgan, George Washington, Patrick Henry, Charles Mynn Thruston, and Generals Arnold, Knox, Greene, Lee, Gates, and a host of others—actually did the deeds at the places and times described herein. So too did their accurately identified foreign and native adversaries. Though this is a work of fiction, readers may be surprised to discover the American Revolution was also one of the most ‘un-civil’ of Civil Wars. If Daniel Morgan were alive today, he would be my near neighbor in Virginia’s beautiful Shenandoah Valley. While visiting a nearby gristmill, Daniel Morgan and Nathaniel Burwell, a fellow Revolutionary War veteran, built in the late 1700s (now restored and operated by the Clarke County Historical Association), I became fascinated by this unsung American hero.

“My good friend Oliver North has spent his life in the company of heroes. In this great read, he tells the stories of some of my personal heroes—the Riflemen you will meet in this book!” ~ LTG William G. “Jerry” Boykin, former commander, U.S. Army Special Forces and author of six books including his autobiography, Never Surrender

Oliver North is a combat decorated U.S. Marine, the recipient of the Silver Star, the Bronze Star for valor, and two Purple Hearts for wounds in action. He is a NYT bestselling author, founder of Freedom Alliance, holder of three U.S. Patents, and served as the 66th president of the NRA. North and his wife, Betsy, have four children, eighteen grandchildren, and live in Virginia. President Ronald Reagan called him “a national hero.”