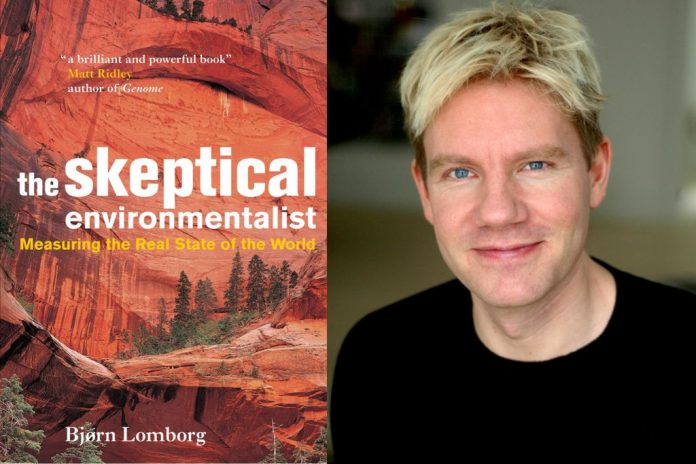 Bjørn Lomborg, a former member of Greenpeace, challenges widely held beliefs that the world environmental situation is getting worse and worse in his book, The Skeptical Environmentalist.

Using statistical information from internationally recognized research institutes, Lomborg systematically examines a range of major environmental issues that feature prominently in headline news around the world, including pollution, biodiversity, fear of chemicals, and the greenhouse effect, and documents that the world has actually improved.

He supports his arguments with over 2500 footnotes, allowing readers to check his sources. Lomborg criticizes the way many environmental organizations make selective and misleading use of scientific evidence and argues that we are making decisions about the use of our limited resources based on inaccurate or incomplete information. Concluding that there are more reasons for optimism than pessimism, he stresses the need for clear-headed prioritization of resources to tackle real, not imagined, problems.

The Skeptical Environmentalist offers readers a non-partisan evaluation that serves as a useful corrective to the more alarmist accounts favored by campaign groups and the media.

Bjørn Lomborg is an associate professor of statistics in the Department of Political Science at the University of Aarhus. When he started to investigate the statistics behind the current gloomy view of the environment, he was genuinely surprised. He published four lengthy articles in the leading Danish newspaper, including statistics documenting an ever-improving world, and unleashed the biggest post-war debate with more than 400 articles in all the major papers. Since then, Lomborg has been a frequent participant in the European debate on environmentalism on television, radio, and in newspapers.

“This is one of the most valuable books on public policy – not merely on environmental policy – to have been written for the intelligent general reader in the past ten years. The Skeptical Environmentalist is a triumph.”
The Economist

“… a superbly documented and readable book.”
~ The Wall Street Journal

“… it is a surprise to meet someone who calls himself an environmentalist but who asserts that things are getting better … Strange to say, the author of this happy thesis is not a steely-eyed economist at a conservative Washington think tank but a vegetarian, backpack-toting academic who was a member of Greenpeace for four years … The primary target of the books, a substantial work of analysis with almost 3000 footnotes, are statements made by environemtal organizations like the Worldwatch Institute, the World Wildlife Fund and Greenpeace. He refers to the persistently gloomy fate from these groups as the Litany, a collection of statements that he argues are exaggerations or outright myths.”
~ The New York Times

“The Skeptical Environmentalist should be read by every environmentalist, so that the appalling errors of fact the environmental movement has made in the past are not repeated. A brilliant and powerful book.”
~ Matt Ridley, author of Genome

“Lomborg pulls off the remarkable feat of welding the techno-optimism of the Internet age with a lefty’s concern for the fate of the planet.”
~ Rolling Stone

“Bjørn Lomborg is an outstanding representative of the ‘new breed’ of political scientists – mathematically-skilled and computer-adept. In this book he shows himself also to be a hardheaded, empirically oriented analyst. Surveying a vast amount of data and taking account of a wide range of more and less informed opinion about environmental threats facing the planet, he comes to a balanced assessment of which ones are real and which are over-hyped. In vigorous and what needs not to be done about those turning out to be pseudo-problems.”
~ Jack Hirshleifer, University of California, Los Angeles

“Bjørn Lomborg raises the important question whether the costs of remedying the damage caused by environmental pollution are higher than the costs of the pollution itself. The answer is by no means straightforward. He has written a pioneering book.”
Richard Rosecrance, University of California, Los Angeles

“When Lomborg concludes that ‘the loss of the world’s rainforests, of fertile agricultural land, the ozone layer and of the climate balance are terrible’ I agree. But we also need debate, and this book provides us with that in generous amounts, incl 2428 footnotes. If you, like I do, belong to the people who dare to think the world is making some progress, but always with mistakes to be corrected, this book makes important reading.”
~ Lars Kristoferson, Secretary General, WWF Sweden

“… probably the most important book on the environment ever written.”
~ booksonline

“Lomborg is right on his points, that his critique of much green activism and its reporting in the media is just, and, above all, that where there is room for disagreement, Mr Lomborg invites and facilitates discussion, rather than seeking to silence it.”
~ The Economist

The Skeptical Environmentalist Challenges widely held beliefs that the environmental situation is getting worse and worse. Making use of the best available statistical information, Lomborg systematically examines a range of major environmental problems that feature prominently in global headline news. His arguments are presented in non-technical, accessible language and are carefully backed up by over 2500 footnotes allowing readers to check sources for themselves. The Skeptical Environmentalist offers readers a non-partisan stocktaking exercises that serves as a useful corrective to the more alarmist accounts favored by campaign groups and the media.