“What we are very proud of, is that we penetrate the global cabinets of countries with our WEF Young Global Leaders.” ~ Klaus Schwab

Through its Young Global Leaders program, the World Economic Forum has been instrumental in shaping a world order that undermines all democratic principles. For several decades, this program has nurtured compliant leaders acting as WEF agents in governments around the world. The consequences are far-reaching and may turn out to be devastating for humanity. Klaus Schwab says out loud that the WEF penetrates the cabinets of other countries to take control.

Carol M. Browner Office of the President of the United States Assistant to the President for Energy and Climate Change Policy (2009–2011)

Pete Buttigieg Government of the United States Secretary of Transportation (2021–)

Mike Espy Government of the US Secretary of Agriculture (1993–1994)

Nikki Haley US Government US Ambassador to the UN

Joseph P. Kennedy III US House of Representatives Rep for the suburbs of Boston, Massachusetts

Kathleen McGinty Office of the Governor of Pennsylvania Chief of Staff (2015); Environmental advisor to VP Al Gore and President Clinton

Kimberly A. Moore US Court of Appeals for the Federal Circuit (2021–) Chief judge

Julissa Reynoso US Embassy US Ambassador to Spain and Andorra (2022–)

Kristen Silverberg US Government US Ambassador to the EU (2008–2009)

William Steiger USAID Director of the Office of Global Health Affairs at the U.S. Department of Health and Human Services

Lawrence H. Summers Harvard University Under Secretary of the Treasury for International Affairs

List created by The Malone institute and the Pharos/Media Foundation 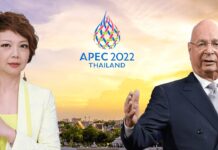 Why Does World Economic Forum Chair Klaus Schwab Say China Is a “Model” for Many Countries?