But what does this really mean and how might it affect nations and people? What is the intention of The Great Reset and why is it so controversial? Is there more to this than meets the eye? Should we be concerned?

Joining us on #NCFCounterCulture to discuss this are:

Hosted by Peter Whittle with guest

Peter Whittle: Hello and welcome to Counter Culture. I’m Peter Whittle. Now as we draw to the end of 2020, we’ve had a hell of a lot of new rather grime buzzwords this year. We’ve had “the new normal”. We’ve had Build Back Better, whatever that means. But the our viewers seem to be most interested in and want to hear about most is “the great reset”. This is something which actually is already being announced by the World Economic Forum, but actually how planned is it? What actually is it? What does it entail. Who’s is behind it and how seriously should we take it? I’m very pleased that today to people, very well qualified, to talk about it. First of all James Delingpole who’s been a great guest on the channel in the past. James, of course is a well-known columnist and broadcaster and host of one of the best podcasts out there. That’s Delingpole. And joining us from Poland we have Ben Sixsmith who writes for Quizlet, who writes for The Spectator and Quilette.

Welcome gentlemen, thanks very much for joining us. First all, James, The Great Reset, this is something which is sort of quite open and out there. This was something, a term used by the World Economic Forum quite some months ago. Can you actually just explained what it, what it actually means. Not the people behind it so far, we’ll talk about that. But actually what is the idea, The Great Reset?

James Delingpole: Well, to cut to the chase, it is, it is technocracy, and technocracy is a totalitarian political philosophy in the way that fascism is, and communism is, and Marxism is, and Nazism is. The USP of technocracy is that instead  of evil dictators or Central Committees, the decisions over your life are made by experts, let’s call them, technocrats, a sort of unelected elite who will decide every aspect of your life. In a way not on akin to the Chinese social credit system. You won’t have, you won’t have any property. It will be allocated to you by this benign elite depending on how well you behave yourself. The energy of energy use will be rationed according again according to, again according to their, their dictates. One of the, one of the fundamental, one of the first of technocracy is the idea that we need to move away from a money based economy to an energy based economy, and this is why it is so intimately bound with the green movement. That, that I, I suppose the reason that I find this easier to grasp than a lot of people is because I’ve been studying this kind of a thing, this kind of thing, for a long long time, and I realize now that the last decade or so with environmentalism is just another facet of this, the technical master plan. This year the green issues have mutated into, into covid-19, which of course is a completely engineered, engineered scare, which has got nothing to do with epidemiological reality. They’ve managed to turn a kind of routine infection into something so important that we should destroy our economy, shut down small businesses, enforce, arguable compulsory, vaccines. This is, this all aligns with the great reset plan. And its happening at an accelerated rate now undercover of the oppressive measures that have been introduced by governments, supposedly to deal with this terrible viral pandemic. 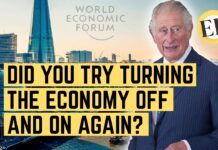 What is “The Great Reset” & Why are People So Worried About It?