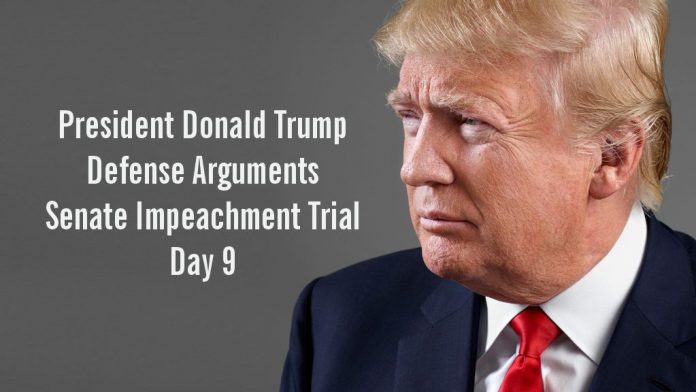 Sen. Rob Portman, R-Ohio, and other Republican senators asked in the impeachment trial about House managers’ decision to evoke arguments made by law professor Jonathan Turley, who testified to the House against the impeachment of President Donald Trump. White House deputy counsel Patrick Philbin responded that “taking snippets out of what [Turley] said does injustice to totality of his testimony.” While he acknowledged that Turley did not argue that a president cannot be impeached unless a crime has been committed, Philbin said he still argued that neither obstruction of Congress or abuse of power are sufficient enough charges to impeach Trump.

Eric Herschmann, a member of President Donald Trump’s legal team, warned against the divisive nature of impeachment in response to a question from Sen. John Thune, R-S.D., about previous statements made by House Speaker Nancy Pelosi, D-Calif. Herschmann noted that this is the first time an impeachment trial has taken place in an election year, and called it “the most massive election interference we’ve ever witnessed.” He further said that the Democrats who started the impeachment investigation into Trump should be held politically accountable to the American people. “We should never consider removing the name of a president from the ballot on a purely partisan basis in an election year, he said.

Video 9: Who is paying Rudy Giuliani? Sekulow debates ethics of his conduct

Sekulow said he found it ironic that Democratic lawmakers would question Trump’s conversations with foreign governments when they themselves sent a letter to the general prosecutor of Ukraine in 2018 raising concerns that the Trump administration would pressure Ukraine into obstructing the Mueller investigation. Senators had a second day to ask questions of the House managers and President Donald Trump’s legal team on Thursday, Jan. 30. That came after both sides were given three days, respectively, to present their case.

Deputy White House counsel Patrick Phlibin said that holding funds for Ukraine until the end of September posed “no damage whatsoever to the national security of the United States,” in response to a question from Republican senators. Philbin argued that it was released at the end of the fiscal year, in a way that was “consistent with the timing in past years.” He noted that officials familiar with the situation, including Ambassador Kurt Volker, had testified that the brief pause on aid to Ukraine imposed by the Trump administration was not significant. “The hold came and went so quickly,” said Philbin, that one official didn’t even notice the change.

Video 13: Herschmann uses Trump’s approval rating to argue he isn’t a threat to the nation

Responding to a question from Republican Senators, Eric Herschmann, a member of President Donald Trump’s legal team, pushed back against House managers’ claims that the president poses a threat to the nation and the American people. Herschmann said Trump’s approval rating is at an all-time high, and Americans are the happiest they’ve been with the state of the country in 15 years. “We trust the American people to decide who should be our president,” said Herschmann, adding that the Democrats only view Trump as an immediate threat to them and their candidates. Herschmann then listed a number of other accomplishments by the Trump administration including on trade and the economy. If those accomplishments are “solely for Trump’s political gain, Herschman said, he should “keep doing it.”

Video 14: Philbin explains that President was Denied Due Process

Summary of the House of Representative 3 Stage Investigation and how the President was denied due process combined with Schiff’s leaks during the house investigation and these due process violations make this impeachment the fruit of the poisonous tree.

Sen. Susan Collins, R.-Maine, asked House managers and President Donald Trump’s attorneys during the impeachment trial whether there are legitimate circumstances for the president to investigate a U.S. citizen, including a political rival. White House deputy counsel Patrick Philbin argued it could be “perfectly legitimate” to ask for an investigation into a U.S. citizen overseas, even if it didn’t result in a criminal investigation domestically.

Republican and Democratic senators jointly submitted a question about whether the Logan Act — which prohibits U.S. citizens from communicating with foreign governments in dispute with the U.S. — applies to the president. White House deputy counsel Patrick Philbin said “there was no conduct of foreign policy carried out by a private person” in the case of Rudy Giuliani, Trump’s personal lawyer who pushed for the ousting of the U.S. ambassador to Ukraine. Philbin cited testimony from Ambassador Kurt Volker, who told the House during the impeachment probe that he understood Giuliani was simply a source of information for the president. He also pointed out that other presidents, such as George Washington and Franklin D. Roosevelt, have relied on private citizens to assist them when conducting foreign policy.

Asked by senators from both parties about reports that the whistleblower who flagged concerns about President Donald Trump’s conduct was connected with the Obama administration and the House Intelligence committee staff. Jay Sekulow, the personal attorney to Trump, pushed back on the idea that whistleblower should be granted total anonymity.

Sen. Richard Shelby, R-Ala., asked during the impeachment trial whether President Donald Trump’s actions could constitute bribery given Supreme Court decision McDonnell v. United States — in which the court ruled what constitutes an “official act” under the federal bribery statute. White House deputy counsel Patrick Philbin said Trump’s actions would not fall under the Supreme Court’s definition. First, he said there is no charge of bribery or extortion charged in the articles of impeachment. Second, he said the McDonnell case made clear that simply arranging a meeting as Trump and his associates did cannot be treated as an “official act” under the bribery statute, and thus can’t support a charge of bribery.

Patrick Philbin, a member of Trump’s legal team, said House Democrats ultimately chose not to subpoena Bolton. He added that Bolton hasn’t verified the assertions he made in his book manuscript.

Sen. Jerry Moran, R-Kan., along with other Republicans, asked President Donald Trump’s lawyers if Congress had other methods “less damaging” than impeachment proceedings to address presidential conduct. Patrick Philbin, a member of Trump’s legal team, said Congress does have a “lot of incremental steps short of impeachment to address friction or conflicts with the executive branch.” “But impeachment is the very last resort for the very most serious conflict, where there is no other way to resolve it,” he said. Philbin said there are “multiple intermediary steps” that ought to be used to check a president before impeachment. “And that’s exactly what didn’t happen in this case,” he said.

Video 36: Lawyer argues Trump shouldn’t be impeached even if Bolton testified to a quid pro quo

Patrick Philbin, a member of President Donald Trump’s legal team, argued against the need to call former national security adviser John Bolton to testify. “There was no quid pro quo,” Philbin said, but then added even if Bolton testified that there was, “the articles of impeachment still wouldn’t rise to an impeachable offense.” Philbin said abuse of power — the first article of impeachment — is too “malleable” an accusation and relies too much on guessing the president’s motive to be impeachable.