The Gateway Pundit is one of the only outlets that has shared the tragic story  of Rosanne Boyland’s death on January 6th, 2021.

Who was Rosanne Boyland?

Rosanne Boyland was a 34 years old young woman,  beloved daughter, middle sister and proud Aunt. She journeyed  by car from Kennesaw, Georgia with a close friend to support the President of the United States that she loved. She was seen smiling happily as she marched to the Capitol in a black hoodie, ripped jeans, tube socks with American flag sunglasses, and clutching a “Save America” sign.

Boyland never made it back to Georgia, or to her family, alive.

This reporter spoke with Boyland’s family and they shared their memories of her in this heartfelt statement:

“Rosanne cared deeply for her family and friends— she ALWAYS greeted and left them with a hug saying, “I love you!” She was dedicated to her sobriety, attending meetings regularly — even the night of January 5th. When most meetings were canceled due to COVID-19, she would arrange to meet informally (usually outside) with her support network because she knew the lock-down was stressful for everyone. Her goal the last several years was to become a certified counselor.  She spent a lot of time researching and finding assistance for others to improve or save their lives. Rosanne genuinely cared for anyone in need and went out of her way to help others — often ignoring her needs in the process. (For example:  Several times Rosanne collected extra blankets and coats, drove into Atlanta, and gave them out to any street people in need.)”

Unfortunately, the mainstream media was quick to slander Boyland’s name after death when she was no longer alive to defend herself. The New York Times reported that Boyland was trampled by an angry Trump mob. Many other news outlets focused on her past drug addiction problems. Some outlets implied she was a conspiracy theorist. USA Today attempted to link her to Q’anon. We will NOT let this be her legacy and the way she was remembered, and we will continue to fight for her.

This reporter released an article with testimony and our investigative team at “The People’s January 6th Commission” released video last month  to illustrate that the mainstream media was wrong. According to multiple eyewitnesses, Boyland was allegedly not trampled by an angry Trump mob but rather these witnesses stated that the police pushed protesters on top of her and would not allow fellow protesters to pull her out. The men that say they tried to pull her out and fight for her are now in jail with no voice to speak out.

by The Gateway Pundit 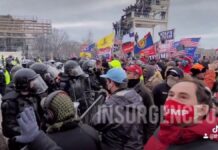