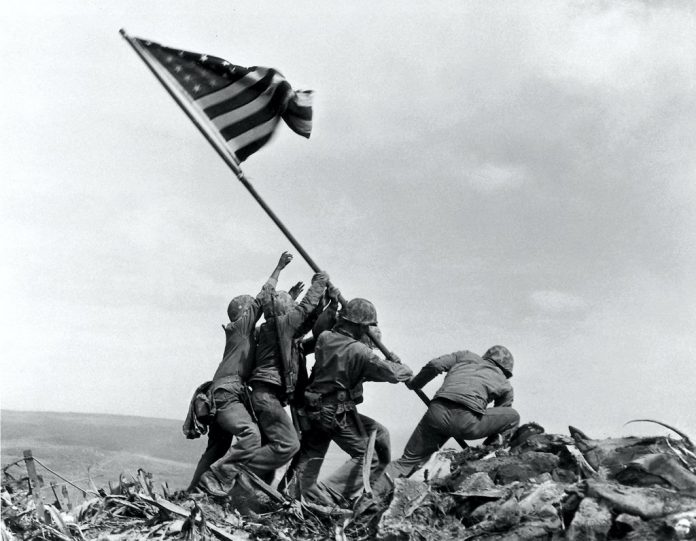 The Raising the Flag on Iwo Jima photo of six United States Marines raising an American flag over the Japanese island of Iwo Jima during World War II is probably one of the American military’s best known photos.

The photograph was captured on the 554 foot top of Mount Suribachi on February 23, 1945 during one of the bloodiest battles in World War II, the battle of Iwo Jima. The photo memorialized the second flag raising, when Marines lifted a much larger U.S. flag on the mountain during the battle for the strategic island where 6,500 U.S. service members lost their lives.

Mike Strank was the leader and Sergeant who was given the order to climb Mt. Suribachi to place the flag. Mike choose his “boys” and he led them to the top of the mountain. He explained to the boys that the larger flag had to be raised so that “every Marine on this cruddy island can see it.” It was Mike who gave the orders to find a pole, attach the flag and “put’er up!”

The flag raising photo was published on the front pages of major national newspapers. The scene has been memorialized in a sculpture near Arlington National Cemetery, which depicts six 32-foot-tall figures in the same positions as the men in the photograph. It can also be seen on a postage stamp.

Joe Rosenthal of The Associated Press won a Pulitzer Prize for the picture and it is the only photograph to win the prize in the same year it was taken.

There are six marines who raised the second United States flag in the Iwo Jima photo. There are four marines in the front line and two in back line. The four in the front are (left to right) Cpl. Ira Hayes, Pfc. Franklin Sousley, Pfc. Harold Henry Schultz and Cpl. Harlon Block. The two marines in the back are Cpl. Michael Strank (behind Sousley) and Cpl. Harold P. Keller (behind Schultz). Sgt. Michael Strank, Cpl. Harlon Block and Pfc. Franklin Sousley died soon after the photo was taken. Others went on to become national heroes within weeks.

In 2016 it was determined that Cpl. John Block was not one of the flag raisers, but rather it was Pfc. Harold Henry Schultz in the photo, and in 2019 it was determined that it was not Cpl. Rene Gagnon, as had been previously believed, but Cpl. Harold P. Keller in the photo. However, “Cpl. Rene Gagnon played a significant role in the flag raising on Mount Suribachi and his role will never be diminished,” the Marine Corps said. “He was directly responsible for getting the larger second flag to the top and returning the first flag for safe keeping.”

The Marines also said in the statement, “Regardless of who was in the photograph, each and every Marine who set foot on Iwo Jima, or supported the effort from the sea and air around the island is, and always will be, a part of our Corps’ cherished history.”

Sgt. Michael Strank was born on November 10, 1919 and he died in Iwo Jim on March 1, 1945. He was a Sergeant in the United States Marine Corps during World War II. Sergeant Strank was assigned to Company E, 2nd Battalion, 28th Marine Regiment, 5th Marine Division as a rifle platoon squad leader. After extensive training at Marine Corps Base Camp Pendleton and in Hawaii for the invasion of Iwo Jima, he took part in the amphibious landing on Iwo Jima on February 19, 1945. On February 23, he was instructed by an officer to raise a larger replacement flag on top of Mount Suribachi so that the American flag could be seen at greater distance. While doing this, he and the other five men were photographed in mid-action. This photo was later titled Raising the Flag on Iwo Jima, and has since become the most copied photograph in history.

Cpl. Harlon Block was born in Yorktown, Texas on November 6, 1924 and was killed in action on March 1, 1945. He joined the Marine Corps in November 1943 and subsequently participated in combat action on Bougainville and Iwo Jima where he was killed in action. Block landed on Iwo Jima on February 19, 1945. He participated in the second American flag-raising on Mount Suribachi on February 23, 1945. Block idolized and followed his rifle platoon squad leader without question as assistant squad leader until Sgt. Michael Strank was killed on March 1, according to the book, Flags of Our Fathers. Block assumed command of the squad and while leading them hours later the same day during an attack toward Nishi Ridge, he was mortally wounded by an enemy mortar round explosion… Block’s last words were, “They killed me!”

Pfc. Franklin Sousley was born on September 19, 1925 in Top Hill Kentucky and he died in Iwo Jima on March 21, 1945. He received his draft notice and chose to join the United States Marine Corps on January 5, 1944. After extensive combat training as a member of the Fifth Marine Division, Sousley landed on Iwo Jima on February 19, 1945, and fought in the battle to capture of the island. When a War bond tour was planned for those in the Iwo Jima flag raising photo he was to be returned to Washington D.C. after the Marines secured the island. However as Shadow of Suribachi: Raising the Flags on Iwo Jima says, when the word reached Iwo Jima, Sousley was on a dangerous part of the island, and his company commander, Captain Dave Severance, decided it was safer to leave him where he was than to attempt to extricate him under the dangerous conditions. According to James Bradley’s Flags of Our Fathers, PFC Sousley was shot in the back by a Japanese sniper on March 21, 1945 as he was walking down an open road on the nearly-secured island. He was originally buried on the island of Iwo Jima, but his remains were re-interred in Elizaville Cemetery in Fleming County, Kentucky on May 8, 1947.

Cpl. Ira Hayes was born on January 12, 1923 in Sacaton, Arizona. He died January 24, 1955. Cpl. Hayes was a Pima Native American. Hayes was an enrolled member of the Gila River Pima Indian Reservation (1859) located in the Pinal and Maricopa counties in Arizona. He enlisted in the United States Marine Corps Reserve on August 26, 1942, and after recruit training, he volunteered to become a Paramarine. He fought in the Bougainville and Iwo Jima campaigns in the Pacific Theatre of Operations. Hayes and the other five flag-raisers became national heroes as a result of Rosenthal’s flag raising photograph. Ira Hayes was never comfortable with his fame and after his service in the Marine Corps, he descended into alcoholism. He died of exposure to cold and alcohol poisoning after a night of drinking on January 23–24, 1955. He was buried with full military honors at Arlington National Cemetery on February 2, 1955.

Cpl. Harold Schultz was born on January 28, 1926 and died on May 16, 1995) was a United States Marine corporal. Schultz entered the Marine Corps Reserve on December 23, 1943 from Detroit, Michigan. He was a member Easy (E) Company, 2nd Battalion, 28th Marine Regiment, 5th Marine Division which was activated in 1944 and began training at Camp Pendleton before the division was transferred to Camp Tarawa near Hilo, Hawaii for further training to prepare for the invasion of Iwo Jima. In January 1945, the division left Hawaii for Iwo Jima. He participated in the battle of Iwo Jima which began on February 19, helped raise the replacement U.S. flag atop Mount Suribachi on February 23, was wounded in action on March 13 and was evacuated off the island, and he was honorably discharged with the rank of corporal on October 17, 1945.

Cpl. Harold Keller was not originally recognized as one of those in the Raising the Flag on Iwo Jima photo until it was announced on Thursday, October 17, 2019 that a mistake had been made and that Keller was in the photo but he had been previously reported as Pfc. Rene Gagnon.