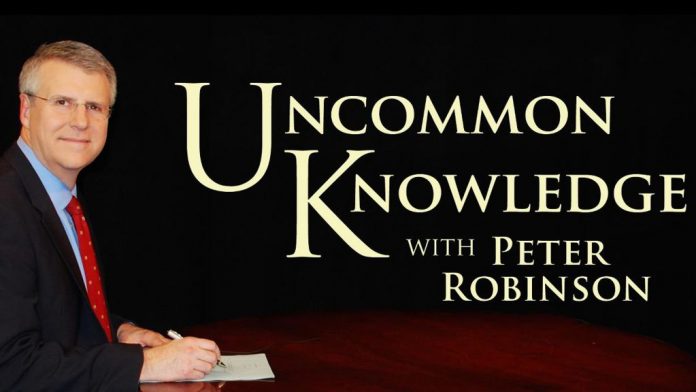 For more than two decades the Hoover Institution has been producing Uncommon Knowledge with Peter Robinson, a series hosted by Hoover fellow Peter Robinson as an outlet for political leaders, scholars, journalists, and today’s big thinkers to share their views with the world. Guests have included a host of famous figures, including Paul Ryan, Henry Kissinger, Antonin Scalia, Rupert Murdoch, Newt Gingrich, and Christopher Hitchens, along with Hoover fellows such as Condoleezza Rice and George Shultz.

The show started life as a television series in 1997 and is now distributed exclusively on the web over a growing network of the largest political websites and channels. To stay tuned for the latest updates on and episodes related to Uncommon Knowledge

Video 1: The Hoover Institution Commemorates the 30th Anniversary of the Fall of the Berlin Wall

A group of Hoover scholars and Stanford historians are asked to recall where they were when the Berlin wall fell, and to give their thoughts and impressions, both from that time and now, with a 30-year perspective. Peter Robinson then interviews Hoover Distinguished Scholar George P. Shultz, who served in the Reagan administration as Secretary of State and was intimately involved in actions and negotiations with the Soviet Union that directly led to the wall being torn down.

Video 2: Jimmy Lai and the Fight for Freedom in Hong Kong

Peter Robinson interviews Jimmy Lai, the entrepreneur and leader in the fight to preserve democracy in Hong Kong. Lai describes the struggles he has endured including having his home fire-bombed, his family harassed, and his business threatened by the Chinese Communist Party. They also discuss the Trump administration’s response to the Hong Kong protest movement, how the NBA and other American businesses found themselves in an awkward position between their business interests and their politics, and what Lai believes to be China’s ultimate goal: to make Hong Kong just another city in Communist China. Finally, Lai asks Americans to keep Hong Kong at the forefront of their thoughts and not to give up on them.

Video 3: The Death of Europe, with Douglas Murray

Peter Robinson is joined by author and columnist Douglas Murray to discuss his new book The Madness of Crowds: Race, Gender and Identity. Murray examines the most divisive issues today, including sexuality, gender, and technology, and how new culture wars are playing out everywhere in the name of social justice, identity politics, and intersectionality. Robinson and Murray also discuss the roles that Brexit and the rise of populism in European politics play in writing immigration laws across the European Union.

Video 4: Why Did U.S. Enjoy Dramatic Improvements in Living During the Last Century?

Peter Robinson opens the session by discussing the major improvements that happened over the last one hundred years in the United States, between 1919 and 2019. He starts the discussion with former secretary of state George Shultz, who encourages a broader vision as we look for the reasons for prosperity. Robinson asks Terry Anderson about the importance of property rights and asks Lee Ohanian about the role of immigration in prosperity.

Peter Robinson talks with General Jim Mattis, about his chaotic life and Chaos (“Chaos” is an abbreviation for “Colonel Has Another Outstanding Suggestion.”) from his new book, Call Sign Chaos: Learning to Lead. Mattis notes that chaos has been a part and parcel of his life growing up, in the marines, and traveling the world. Mattis further talks about how chaos has been introduced by organizations to disrupt order and keep opponents at the top of their game. But on the battlefield, it is better to introduce chaos early, in order to disrupt enemies’ plans and thus create problems for them and, ultimately, dominate them.

Peter Robinson opens the show by asking Peter Thiel’s views on his own essay “The Straussian Moment.” Thiel responds by saying that people today believe in the power of the will but no longer trust the power of the intellect, the mind, and rationality. The question of human nature has been abandoned. We no longer trust people’s ability to think through issues. Thiel notes that this shift began to take place in 1969, when the United States put a man on the moon; three weeks later Woodstock took place, moving the culture in the direction of yoga and psychological retreat.

What did Roosevelt, Churchill, and Stalin want at the beginning of the Second World War? Peter Robinson starts the discussion by why the “big three” came together as allies in response to Operation Barbarossa during the war. What did the leaders of the “grand alliance” of Britain, the United States, and the Soviet Union want? What were their national interests?

Based on new evidence and knowledge that functioning proteins are extremely rare, should Darwin’s theory of evolution be dismissed, dissected, developed or replaced with a theory of intelligent design?

Is Charles Darwin’s theory fundamentally deficient? David Berlinski makes his case, noting that most species enter the evolutionary order fully formed and then depart unchanged. Where there should be evolution, there is stasis. So, was Darwin wrong?

David Davenport, Hoover fellow and coauthor of How Public Policy Became War, analyzes how presidents have too readily declared war (on terror, drugs, poverty, you name it) and called the nation into crisis, partly to tackle the problem and partly to increase their own power.

What’s wrong with public education in the United States? Betsy DeVos, US Secretary of Education, analyzes the role of government in the U.S. education system and the changes she’s making to the Department of Education.

Video 12: Thomas Sowell on the Origins of Economic Disparities

Is discrimination the reason behind economic inequality in the United States? Thomas Sowell dismisses that question with a newly revised edition of his book Discrimination and Disparities. He sits down with Peter Robinson to discuss the long history of disparities among humans around the world and throughout time.

Video 13: Victor Davis Hanson on “The Case For Trump”

How did blue-collar voters connect with a millionaire from Queens in the 2016 election? Martin and Illie Anderson Senior fellow Victor Davis Hanson addresses that question and more in his newly released book, The Case for Trump. He sits down with Peter Robinson to chat about his motivation to write a book making a rational case for those voters who chose Donald Trump over Hillary Clinton.

How did Winston Churchill defend the British Empire throughout his life? Andrew Roberts, the Roger and Martha Mertz Visiting Fellow at the Hoover Institution, brings keen insights into the life of Winston Churchill with the book Churchill: Walking with Destiny.

What is “false black power?” According to Jason Riley, author of False Black Power?, it is political clout, whereas true black power is human capital and culture. Riley and Peter Robinson dive into the arguments in Riley’s new book, the history of African Americans in the United States, and welfare inequality in black communities.

Did President Reagan and Pope John Paul II have a secret alliance or simply an aligned foreign policy strategy that helped to end the Cold War? Former attorney general to President Reagan, Edwin Meese III, answers these questions and more in this episode of Uncommon Knowledge.

Video 17: Cost-Effective Approaches to Save the Environment, with Bjorn Lomborg

How much will it cost to slow climate change? Bjorn Lomborg, president of the Copenhagen Consensus Center, performs cost-benefit analysis on the Green New Deal and the UN’s Climate Report, analyzes the economic impact of climate change in the next century, and proposes economically feasible alternative plans to reduce climate change.

Video 18: Heather Mac Donald On How The Delusion of Diversity Destroys Our Common Humanity

Is the dedication to diversity undermining American culture? In her book The Diversity Delusion, Heather Mac Donald argues that the focus on race and gender diversity is harming society. Mac Donald and Peter Robinson discuss how she was protested off of school campuses by students because of her ideas. They discuss the collapse of free-speech ideals on college campuses in the United States and how the dedication to diversity doesn’t extend to a diversity of thought. (The War on Cops)

Video 19: Are There Limits on Emergency Powers? With John Yoo and Richard Epstein

Can a sitting president be indicted? What emergency powers does President Trump have to build a border wall and stop the government shutdown? Richard Epstein and John Yoo sit down with Peter Robinson to answer these legal questions and more regarding the constitutional powers of the presidency, the state of the Supreme Court, the Mueller investigation, and the legality (or lack thereof) of indicting a sitting president.

Video 20: Getting Work Done in Congress, with Josh Hawley and Michael Waltz

Freshman members of Congress senator Josh Hawley and representative Michael Waltz talk about their recent experiences working in Congress and their desire to push for less politics and more accomplishments that will help strengthen the United States. The two congressmen discuss why they chose to dedicate their lives to serving the American people and how they are asking tough questions and bringing fresh ideas to jump-start a stagnant government.