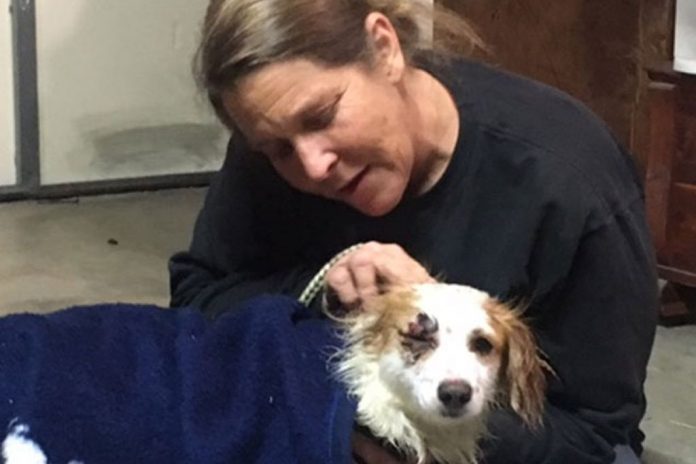 Babs Fry, Founder and President of “A Way Home for Animals Inc.,” is a canine super sleuth. When man’s best friend goes missing, she can sniff out the escaped pooches whereabouts faster than you can say, “Lassie Come Home.”

“Basically what I do is to serve as a go-to point for people who have lost their pets,” said Fry, “When that happens most people don’t know where to begin. They panic, and then go racing around looking for their dog, and when that doesn’t work they put out flyers, all which is counterproductive. So I teach people the steps they should take and what they should avoid, and I’ll personally get in involved if needed.”

Bab Fry’s’ reputation as a tracker of lost dogs is well known, especially in the Scripps Ranch community where she has applied her skills to help numerous locals locate and bring home their runaway dogs.

When Scripps Ranch resident Leslie Chadwick’s foster dog Penny went A.W.O.L. (Absent With Out Leave) via an open gate she turned to Fry for help.

“Babs reached out to us the next day and told us what to do and what not to do,” said Chadwick. “We had one false sighting, then the following day Penny was seen in a nearby field. Babs told me to take our other dog and a rotisserie chicken and stay in one place.”

“The biggest mistake people make is to chase after their dog,” said Fry. “Stay in one spot, don’t spread your scent around because your dog will follow that scent instead of going back home.  Don’t use fried chicken or boiled chicken or chicken Nuggets. The rotisserie chicken has a unique smell that attracts dogs; it really is very effective.”

Standing in the mud and pouring rain, in one hand Chadwick had her dog on a leash, in the other had she gripped a rotisserie chicken. It wasn’t long until Chadwick and Penny were reunited and on their way home.

“Babs is amazing,” says Chadwick. In fact, in the last eight days she has been instrumental in getting three dogs back to owners here in Scripps Ranch.

“It takes a village to rescue lost dogs,” said Fry. “From putting up posters, calling in sightings, and Social Media detectives doing follow-ups.”

Fry is quick to credit the individuals in the Scripps Ranch community that volunteer to be part her support group- like Leslie Chadwick and Marsha Linehan.

“I originally got involved when Babs helped find my friends dog,” said Linehan. “My friend had cancer and she was very distressed when her dog went missing. But thanks to Babs and her friend Traper Laura, they quickly brought the dog home.

“Then I helped rescue a dog named Tigger. He was missing for two weeks. My sister-in-law and I followed him in the middle of the night armed with a rotisserie chicken and we saw Trigger hanging out with a coyote. We were eventually able to get Trigger into a trap and took him to his owners.”

The most recent rescue was a pooch named Canyon who’d been on the run for more than a week. Working endlessly, all hours of the day and night Babes, Chadwick and Linehan completed another successful rescue.

Those ladies (Chadwick and Linehan) literally spent hours without sleep, waking up in the middle of the night to help do whatever it takes to locate a missing dog. Neither Addy or Canyon or Tigger would be safe today had it not been for the efforts of Marsha and Lesley.”

Fry has helped to find hundreds of dogs in San Diego and even more nationwide. “I live in East County, but my services have actually gone worldwide. I take calls from anywhere in the world.”

Fry’s serves are free, the expenses come out of her own pocket- to find out how you can help and to learn more about the do’s and don’ts when it comes to finding and trapping a runaway dog, here is Bab’s contact information: 619-249-2221 awayhomeforanimals@gmail.com