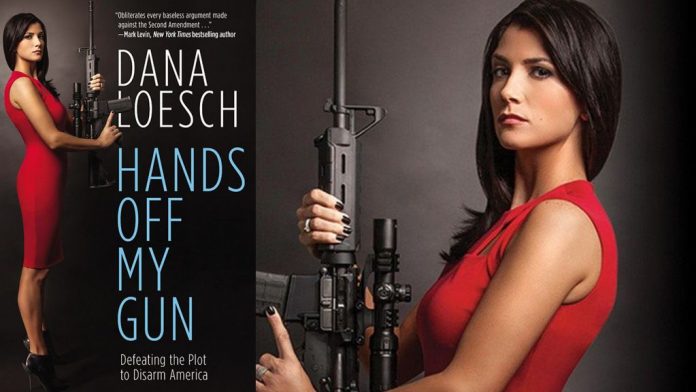 Respected conservative talk show host, blogger and TV commentator Dana Loesch gives her views on the history and intent of the Second Amendment and discusses what she believes gun confiscation would mean to Americans’ basic rights as citizens.

How many people in America today are truly well-versed in the history of the Second Amendment, and why it was included in the Bill of Rights?

In HANDS OFF MY GUN, Dana Loesch explains why the Founding Fathers included the right to bear arms in the Bill of Rights, and argues that “gun control” regulations throughout history have been used to keep minority populations under control. She also contends that current arguments in favor of gun control are primarily based on emotions and fear.

This narrative is a must-read for every Second Amendment supporter. Dana Loesch is a determined and fierce advocate for those rights and shouts out: hands off my gun!

Dana Loesch is the number one nationally-syndicated female talk radio host in the country and hosts her award-winning show, The Dana Show, from Dallas, Texas. She’s the author of two books, the national best-seller Hands Off My Gun: Defeating the Plot to Disarm America which turned the tide in the gun control debate, and Flyover Nation: You Can’t Run a Country You’ve Never Been to, which predicted the coastal-flyover divide and sentiment that decided the 2016 election. Her third book is scheduled for a spring 2020 release.

Dana appears regularly on Fox news and has provided election analysis for ABC, CNN, Fox; she’s appeared on HBO, and has co-hosted “The View.” A Second Amendment advocate for well over a decade, Dana is one of the nation’s premier voices for gun rights, having represented gun owners on CNN’s infamous town hall on gun control in the wake of the Parkland tragedy and was credited with adding nearly a million members to the National Rifle Association during her year-long association with the group.