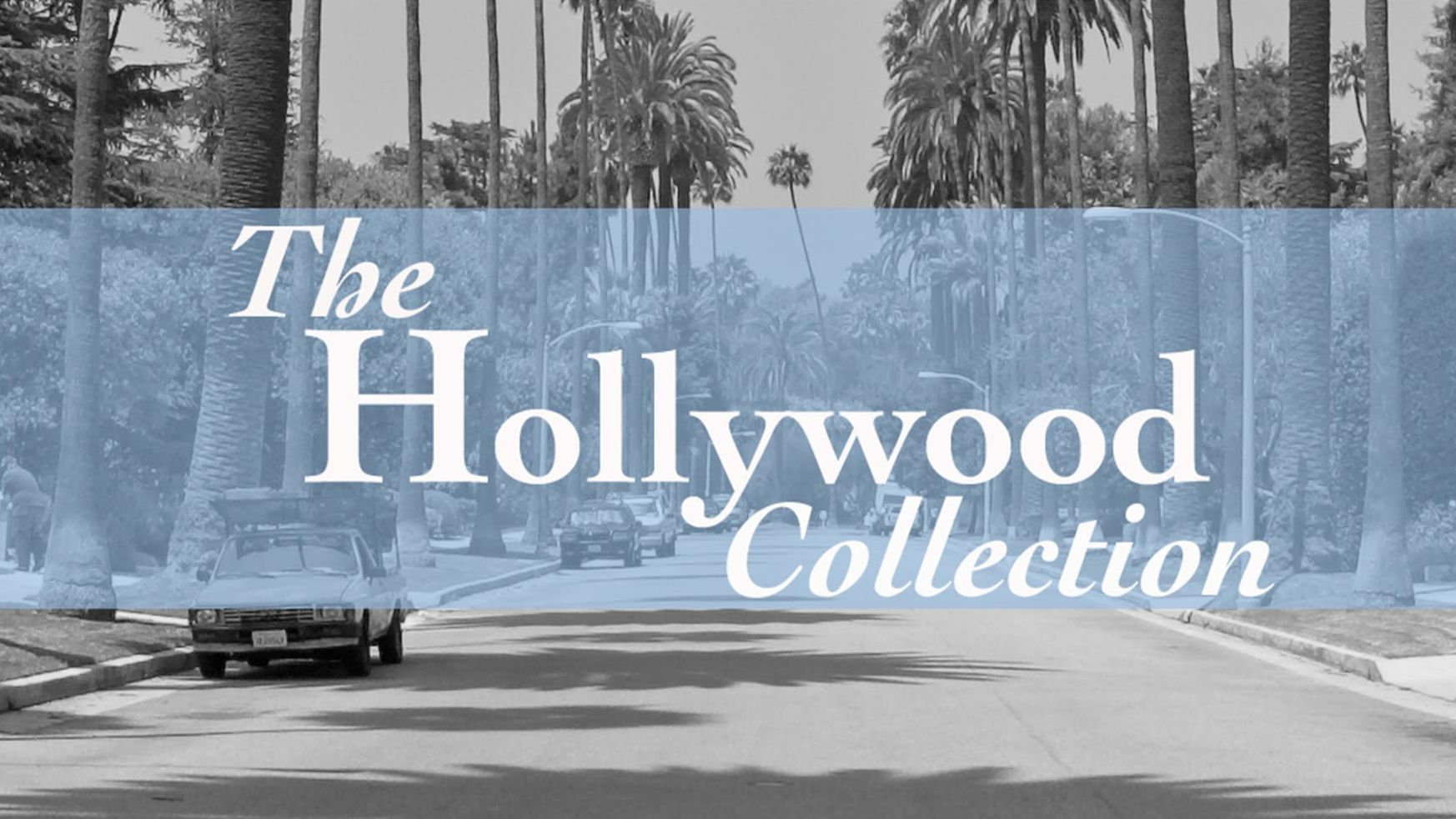 For nearly a century, Hollywood has captivated and influenced generation after generation of moviegoers. Its magic has left an indelible imprint on every culture with a movie projector. Originally broadcast on PBS, HBO/Cinemax, TNT, A&E, Lifetime, and Bravo, The Hollywood Collection is one of the most comprehensive collections of biographies and cinema retrospectives ever compiled, a spectacular treasury of revealing biographies of Hollywood’s most beloved stars. These biographies, some narrated by the stars themselves, include interviews with friends, family members and colleagues, as well as clips from their most memorable films, and in some cases, rare home movies.

“Over 350 actors, writers, directors, producers, make-up people, publicists, agents, and family members all gave of themselves to help make these shows possible. This was the way it was in Hollywood in its classic era and these were the stars that captured us.” – Gene Feldman, producer/director of The Hollywood Collection.

Catapulted to international prominence by Sergio Leone’s Spaghetti Westerns, Clint Eastwood leapt from TV lead to world-class movie star. Then with Dirty Harry came super-stardom. Eastwood’s goal was to get behind the camera to make great films. To achieve this end, he has produced, directed and starred in such classics as Play Misty for Me, The Outlaw Josie Wales, and more.

Hollywood Collection | Yul Brynner: The Man Who Was King

There is only one Yul Brynner. No other actor had his looks, his range of talents, his energy, and his capacity to draw others into the spell of his charm. A true sophisticate of deliberately mysterious origins, Yul Brynner was at home in a wide variety of languages and social environments.

Narrated by Harry himself in a candid look at his own life and career, the program features interviews with jazz greats Branford and Wynton Marsalis and their father, Ellis Marsalis.

It was said of him that in more than seventy films, he never once gave a bad performance.

Hollywood Collection | The Story of Lassie

For 50 years, she has represented all that is good about the enduring bonds between human beings and their dogs. She first leaped to stardom in the 1943 MGM film, Lassie Come Home.

Abandoned by his father, he was a reform school kid with nothing going for him and a giant chip on his shoulder. He joined the Marines, but never stayed far from trouble.

There never was a star quite like her. Adored by adults and children alike, at four she already led at the Box Office – ahead of Gable and Cooper. Her films saved a movie studio from bankruptcy, and a President credited her with raising the morale of Depression-weary Americans.

Shirley MacLaine was the product of a strict middle-class background from which she and her brother, the future actor Warren Beatty, escaped into the fantasy world of show-biz. Her ballet training and her long-legged pixie charm led to rapid success on Broadway in musical comedy.

Roger Moore has traveled far.. from working-class London to the glamorous Riviera, from contract player to The Saint and 007, from film extra to Hollywood superstar, from office boy to Unicef’s Ambassador-at-Large. Here is Roger Moore’s own story, as told by the famous actor himself. Features clips from The Man With The Golden Gun, The Spy Who Loved Me, Octopussy., The Saint, and The Persuaders.

This entertainment special looks at the life and career of one of Hollywood’s consummate leading men, narrated with good humor by Mitch himself. His father was half Blackfoot Indian and was killed when Mitch was only two.

Narrated with gentle self-deprecating humor and honesty by the star himself, this Special features clips from such films as Educating Rita, The Man Who Would Be King, Alfie, California Suite, Hannah And Her Sisters, Mona Lisa, Sleuth, Deathtrap, Zulu, and The Ipcress File.

Her story is well-known – the lonely child who yearned for affection and approval which she finally seemed to find as Hollywood’s greatest love goddess. But even though she scaled heights few could even dream of, she was one of the loneliest of stars. And yet, in spite of the breakdowns, the failed marriages, the sordid rumors surrounding her life — and her death

Hollywood Collection | Mae West: And the Men Who Knew Her

As the first “blonde bombshell,” Mae West reigned supreme and changed the nation’s view of women, sex and race- on stage, in films, on radio and television. Including clips from Night After Night, She Done Him Wrong, I’m No Angel, Belle of the Nineties, and Klondike Annie. In addition to home movies and archival footage, Anthony Quinn, Rex Reed and Robert Wise provide interviews.

This glamorous and hugely popular actress raised herself from brutal poverty to Academy Award-winning stardom by guts, determination and hard work. During her fifty-year career, she made over eighty films. But her obsessive perfectionism led to the later caricature of coat-hanger-wielding harridan that even the adoration of fans could not counter. Still, she has endured as one of the most popular icons of the movies, an early role model to a million young women who aspired to her image of stylish magnetic power and unquestioned independence.

John Uhler “Jack” Lemmon III, was born on February 8, 1925. An only child, he was raised in Boston, Massachusetts, and was that rarity among Hollywood stars, a man with affectionate memories of his parents. Graduating from Harvard, Jack headed for New York City to become a professional actor.

One of the greatest actresses of her time, Ingrid Bergman starred in such movie classics as Casablanca and Anastasia. Appearing together for the first time, her daughters Pia Lindstrom and Isabella Rossellini take a personal look at their mother’s life, telling her story from her childhood in Sweden to her death at age 67 from breast cancer, with never-before-seen photographs and home movies.

She came from a wealthy and competitive Philadelphia family, but the life of well-brought up society held little appeal for this acclaimed beauty.

Hollywood Collection | Gary Cooper The Face of a Hero

Known for his personification of the Western Hero, it was Montana-born Cooper’s horse-riding skills that first brought him bit parts in movies.

Amiable and unassuming, Fred MacMurray went from small-town boy to one of Hollywood and television’s most enduring stars. This program includes clips from some of MacMurray’s most notable films, such as The Gilded Lily, The Apartment, The Absent Minded Professor, Swing High, Swing Low and the TV series, My Three Sons.

He has been king and slave, hero and villain, renowned throughout the movie-going world for the heroic figures he played during his early years in Hollywood: Moses, Ben-Hur, El Cid and Michaelangelo.

Cary Grant was the very essence of a movie star: a man every woman loved and every man wanted to be. His deft comic style merged easily with his strength as a romantic leading man. But the suave exterior concealed a complex and often sensitive individual.

Born Ruby Stevens, she was orphaned when she was four. A chance audition led to a chorus job. By 17 she was a Zeigfield Girl. At 20 she earned excellent reviews for a bit part in a Broadway play – and she had a new name: Barbara Stanwyck.

Audrey Hepburn was one of movies best-loved stars, blessed with beauty, talent, an elegant sophistication, and an enduring aura of youthful innocence. As Goodwill Ambassador for Unicef, she spoke for the world’s suffering children and families, earning an affection and admiration that only increased with news of her untimely death. From the star herself we learn of her career, family and friends.

Born in Mexico, he became the main family provider when his father died in an accident. So began the story of a man who had a “thousand jobs” before acting in a film of Cecil B. DeMille – and who within weeks had married the great director’s daughter.

Apart from the legacy of his movies, Alan Ladd left behind a close- knit family which counts among its members some of filmdom’s greatest successes.