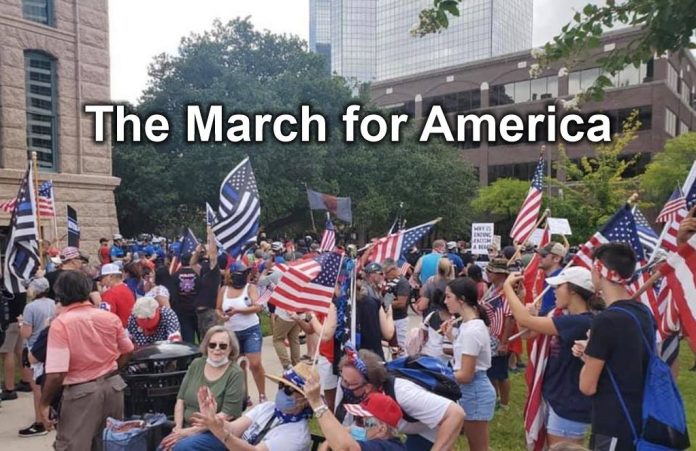 For the past few months, we have seen chaos, division, and hatred in our streets. Statues have been destroyed, Police Officers and other innocent lives have been ruined or even lost, and businesses are being destroyed.

With so many negative events taking place, one young man Carlos E Turcios, founder of Young Texans for Freedom, hosted the March For America in Fort Worth, Texas, believing that it was time to unite Americans to show love for our nation.

Supporters of The March For America, met at the Fort Worth Police/Firefighter Memorial to march and listen to patriotic speakers including Sheriff Bill Waybourn. Supporters showed that, as Americans, we cannot be divided. They showed support for law enforcement and communities. Those who joined the march brought their American flags and their Back the Blue flags. They wore their patriotic attire as well.

Jamie Cashion shared about The March For America on his Facebook post today, “Today as we marched for a greater cause, one of unity and love and support FOR FIRST RESPONDERS and ALL AMERICANS, I could not help but get chocked up. Watching young children waving American flags, really not understand the symbolism of it, then watching BLM (Black Lives Matter) people yell at them and call them such harsh words, some even saying “their heads would be chopped off, they will follow them home, your faces are on video” blah blah, made me sick. So sick, all I could do was tear up (since, legally I can not take their heads off for terroristic threats to a child) as these children do not understand all the hatred. Yes, perhaps their parents should not have brought them, but then again, this is what the world has become and they need to understand how evil people can be not to fall in to a trap of innocence. THANK YOU all who came out to support, PLEASE, if you love this country and appreciate ALL LIVES especially our FIRST RESPONDERS take your stand! Today was a GREAT DAY, our local law-enforcement understood that there’s many of us that do care about their safety and well-being and appreciate the sacrifices they make for all of us here in the city of Fort Worth and Tarrant County.”