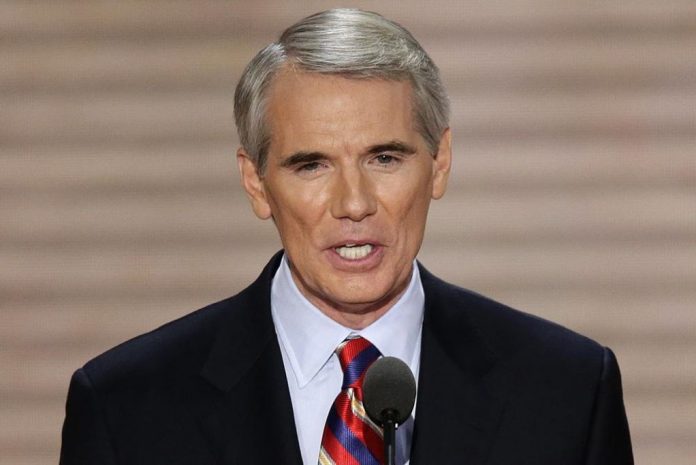 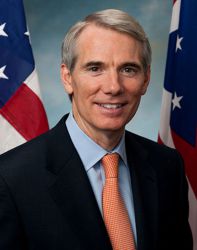 Rob Portman is a United States Senator from the state of Ohio. He was elected in 2010, running a campaign that focused on common-sense conservative ideas to help create jobs and get the deficit under control. Rob won with a margin of 57 to 39 percent, winning 82 of Ohio’s 88 counties.

Rob was born and raised in Cincinnati, where he lives today with his wife Jane, and their three children, Jed, Will and Sally. He grew up in a small business family, where he learned early on the value of hard work, leadership, and fiscal responsibility. When Rob was young, his dad, Bill Portman, borrowed money to start Portman Equipment Company, where Rob and his brother and sister all worked while growing up. His father, and then his brother, built the family business from a small forklift truck dealership with five employees, with Rob’s mom as the bookkeeper, to one that employed more than 300 people. Rob became a lawyer and developed his own private practice, representing Portman Equipment Company and other small businesses. In 1993, Rob was a partner in the Cincinnati law firm of Graydon, Head and Ritchey when he was elected to Congress, where he represented the diverse, seven county Second District in southern Ohio. He was proud to serve the Second District for twelve years, and in seven elections, he never received less than seventy percent of the vote.

During his time representing the Second District, Rob Portman earned a reputation as a serious leader who focused on results. Rob was actively involved in crafting and promoting the historic welfare reform efforts as a member of the committee that wrote the legislation, and he was a forceful advocate of the balanced budget that passed in 1997. Rob gained the respect of both Republican and Democratic colleagues through his successful, bipartisan legislative initiatives, including several measures he authored to increase retirement savings, reform the IRS and add over fifty new taxpayer rights, curb unfunded mandates, reduce taxes, and expand drug prevention and land conservation efforts.

In 2005, Rob left Congress when he was asked to serve as the United States Trade Representative, the Cabinet-level official responsible for implementing and enforcing U.S. trade policy. In his one year in the job, Rob was successful in reducing barriers to U.S. exports and increasing enforcement of trade laws to help level the playing field for American farmers, workers and service providers. Under his leadership, American exports increased and the U.S. brought successful legal challenges against international trade law violations.

Following his accomplishments as Trade Representative, Rob was asked to serve in another Cabinet post, this time as Director of the Office of Management and Budget. A deficit hawk, Rob made his mark by proposing a balanced budget, fighting irresponsible earmarks, and putting in place new transparency measures for all federal spending.

Rob Portman succeeded George Voinovich as Ohio’s U.S. Senator on January 5, 2011 and immediately began fighting for pro-growth, pro-jobs policies to help get Ohio and our nation back on track.